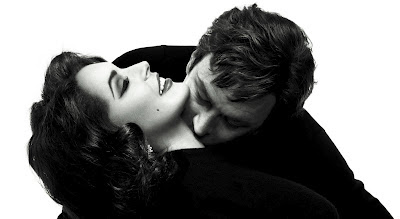 The Daily Beast (or rather me directly) obtained a production draft of Lifetime’s Elizabeth Taylor biopic starring Lindsay Lohan. I pick out eight especially salacious bits from the script.

Over at The Daily Beast, you can read my latest feature, "Liz & Dick: 8 Crazy Scenes from Lindsay Lohan’s Elizabeth Taylor Biopic," in which I read Christopher Monger's script and pick out the eight craziest, oddest, most salacious bits of Lifetime's upcoming Elizabeth Taylor and Richard Burton biopic, Liz & Dick, starring Lindsay Lohan.

And yet the troubled, talented 25-year-old actress is currently playing Taylor in Lifetime’s made-for-TV movie Liz & Dick, about the tumultuous romance between Taylor and her costar/husband Richard Burton (played here by True Blood’s Grant Bowler).

Lohan is once again making headlines with her off-screen behavior—so perhaps she’s perfect as Taylor, after all. Just last week, Lohan allegedly crashed a rented Porsche into an 18-wheeler on Malibu’s Pacific Coast Highway. Lohan’s accident occurred as she was filming Liz & Dick, which hails from writer Christopher Monger (Temple Grandin) and director Lloyd Kramer (The Five People You Meet in Heaven) and depicts Burton and Taylor’s brief encounter at a 1954 pool party, their first full-fledged meeting on the set of 1963’s Cleopatra, their headlines-grabbing romance, and Burton’s death in 1984.

The Daily Beast obtained a production draft of Monger’s script for the project, dated April 3, 2012. Unlike most of the schlocky Lifetime telepics (to wit: the fast-tracked William & Kate movie), Monger’s script isn’t terrible; however, a production draft can change significantly during the shooting of a film and the success or failure of Lifetime’s take on Taylor and Burton will rely a great deal on how well Lohan and Bowler can inhabit the Hollywood icons’ personas.

Monger, however, has a good grasp on the alchemy between Taylor and Burton, as well as their rowdy romance and their low points, though he speeds through their relationship at a sometimes alarming pace, particularly at the end of the script, when the two remarry in Botswana after their divorce. Their reunion is brought about after Taylor’s colon-cancer scare and he rushes to her hospital where she is upside-down in traction; the two remarry, but then suddenly they’re not together, time has passed, Burton is himself remarried (to Sally Hay) and Burton dies after writing Liz a letter from his deathbed. (And then there’s the “ethereal sound-stage” framework that Monger repeatedly returns to throughout the script. But I’ll get to that in a bit.)

What follows are eight of the most shocking moments in the script for Liz & Dick.