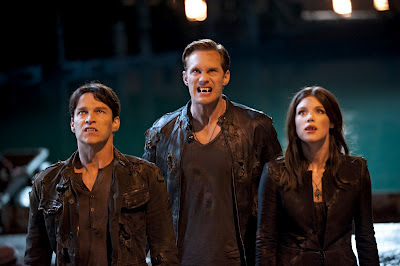 HBO’s True Blood returns on Sunday. Over at The Daily Beast, I review the first four episodes of the fifth season and ask: what happened to the vampire drama?

You can read my latest feature, "True Blood Season Five: Has HBO’s Vampire Drama Lost Its Bite?", in which I examine the first four episodes of Season Five of True Blood and write, "The first four episodes of Season Five… reflect what’s wrong with the most recent seasons of the HBO drama: they lack focus." I also explore how the lack of baseline normalcy--and the sense that everyone in Bon Temps is somehow "special"--has robbed the show of dramatic stakes.

HBO’s popular True Blood has never been known as a slow-burn drama. Instead of advancing the plot minutely from episode to episode, the Southern Gothic vampire drama has, during its four seasons to date, zoomed at a breakneck speed, hurtling toward its cliffhanger ending each year at a maximum velocity.

While that can rev up viewers’ adrenaline levels, it can also lead to severe narrative whiplash, which is exactly what has happened to the show, which begins its fifth season on Sunday evening. (It is also the final season under the eye of showrunner Alan Ball, who will depart at the end of the season to focus on his new Cinemax show, Banshee, launching in 2013.)

The first four episodes of Season 5 recently sent out to critics reflect what’s wrong with the most recent seasons of the HBO drama: they lack focus. The plot, which is based in part on Charlaine Harris’s novels, zigzags in so many different directions that it often seems as though there are no less than 10 separate television shows existing side by side within True Blood. While the early seasons of the show wisely focused on a few main characters—such as Anna Paquin’s telepathic waitress Sookie Stackhouse; brooding vampires Bill Compton (Stephen Moyer) and Eric Northman (Alexander Skarsgård); Sookie’s hotheaded best friend Tara Thornton (Rutina Wesley); her secretive boss Sam (Sam Trammell); and her horndog brother Jason (Ryan Kwanten), along with a few other central players—the show’s success at creating vivid and engaging supporting characters has also been its downfall.

Amanda from Georgia said…
Nice insight. I'm thinking this season will be a mess with everything going in 100 directions and little to tie it together. It's still a fun mess, I hope.
6/08/2012