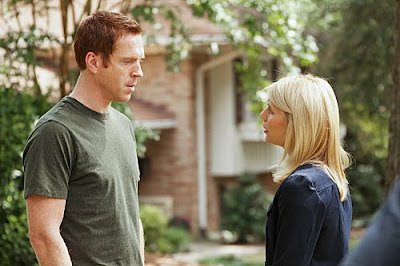 Over at The Daily Beast, you can read my latest feature, "Homeland Sweeps the Emmys: Why Showtime’s Thriller Exploded," in which I take a look at Homeland's victory at the Primetime Emmy Awards last night and look at why the premium cable drama toppled Mad Men.

Not only did Mad Men not win the Emmy Award for best drama, the AMC period drama went home empty-handed Sunday, leaving the 64th Annual Primetime Emmy Awards with not a single statuette in its possession.

In the weeks leading up to the awards telecast, Mad Men seemed very much like a sure thing: it had won four of the four times it was eligible for Best Drama, and the odds seemed very much in its favor once more. In fact, Showtime’s Homeland—the taut psychological drama that also nabbed best-actor and -actress awards for Damian Lewis and Claire Danes—had cooled in recent weeks, with Breaking Bad or Downton Abbey poised as far more likely usurpers to Mad Men’s throne.

Yet Homeland did triumph, putting Showtime on the awards map in a very real way and ending the streak maintained by AMC and HBO. It’s not only a victory for showrunners Alex Gansa and Howard Gordon, but also for the new regime at Showtime overseen by David Nevins, whose support for the fledgling Homeland has paid off in dividends.

However, those scratching their heads over what happened to the once-Teflon Mad Men are missing the point. Homeland’s victory isn’t much of an upset, if we’re being honest. While the least expected choice of the viable ones, the Emmy is still very much deserved. While I’m a staunch supporter of Mad Men (and will continue to be), Homeland is new and shiny, and Emmy voters, like magpies, are often drawn to the glitter of a fresh show. But Homeland is also a highly provocative drama, fueled by paranoia, patriotism, zealotry, and madness.