The Daily Beast: "Review: Season 2 of Homeland and Season 4 of The Good Wife" 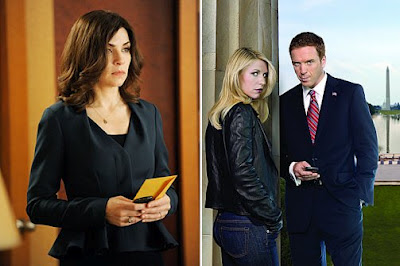 Set your DVRs! I review Season Two of Showtime’s Homeland and Season Four of CBS’s The Good Wife, finding common ground in their deft and subtle explorations of identity.

At The Daily Beast, you can read my latest feature, "TV's Kick-Ass Women Return," in which I review Season Two of Homeland and Season Four of The Good Wife, tracing the way that both shows explore their characters' shifting identities.

In the season opener of Homeland, which airs on Sunday, Claire Danes’s Carrie Mathison smiles.

If you’ve been watching Showtime’s Homeland, the newly crowned winner of the Emmy Award for Best Drama, this seems entirely contrary to her character, a bipolar and deeply disgraced CIA officer who underwent electroconvulsive therapy in the first season finale. Carrie isn’t prone to happiness: she has been misunderstood, mocked, and kicked out of the intelligence community. For all of that, Carrie was also right that Sergeant Nicholas Brody (Emmy Award winner Damian Lewis), a former prisoner of war, is not what he appears to be.

Danes—who also won an Emmy on Sunday—inhabits Carrie with a crippling onus placed on her, one that has only widened the cracks in her sanity. Her prescience and her instincts go unheeded, and the damage that she causes threatens to consume her altogether.

CBS’s The Good Wife, also returning on Sunday evening, will deal with its own identity crises this season. On the surface, these two shows don’t seem to share many similarities. One is a tense terrorism thriller on premium cable, the other a contemplative legal drama that explores technology, politics, marriage, and the law with a subtlety that make it a paragon among television dramas. Both, however, tackle issues of self-identification with insight and perspicacity, and this is felt even more keenly in Homeland’s second season and The Good Wife’s fourth.

Within The Good Wife, Alicia Florrick (Julianna Margulies) has played the dutiful wife and the aggrieved spouse with equal vigor, a friction that cuts to the core of The Good Wife. What does it mean to be good? And how does that reflect our own needs and desires outside that of familial responsibility? Having lost everything after the betrayal of her philandering husband, Peter (Chris Noth), Alicia had to, out of necessity, redefine herself through her work, returning to a profession that she had left. Her discovery that she excelled in the field is the first in a series of transformations for the character.

Continue read at The Daily Beast...