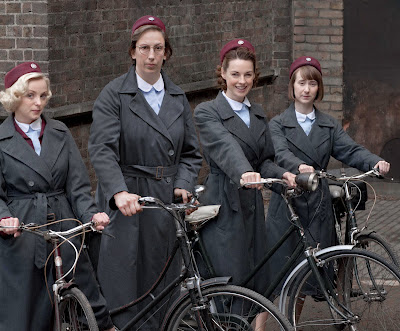 Are you watching PBS' Call the Midwife? If not, you're missing out. In an effort to lure you, I explore the charms of the delightful ’50s drama and its breakout character, Miranda Hart’s awkward and hilarious Chummy Browne.

At The Daily Beast, you can read my latest feature, "Call the Midwife: Miranda Hart’s Chummy Browne Steals the Show," in which I praise both the British period drama and specifically, fall's breakout TV character, Miranda Hart's Chummy.

Miranda Hart might not be well known in America, but that is about to change, thanks to her role in PBS’ period drama Call the Midwife, which airs Sundays at 8 p.m. (Check your local listings for details.) In fact, her disarming performance turns clumsy midwife Camilla Fortescue-Cholmondeley-Browne (or Chummy for short) into this season’s breakout character.

Based on the memoirs of the late Jennifer Worth, Call the Midwife centers on a group of young midwives and the nuns of nursing convent Nonnatus House in post-war London. The series scored an impressive audience of nearly 10 million viewers when it aired earlier this year in the United Kingdom, coming in second behind the third season of Downton Abbey as the highest rated drama of the year. A Christmas Special will air in December on BBC One, and a second season has been commissioned for 2013.

The 39-year-old Hart, best known for writing and starring in BBC comedy Miranda (itself based on Hart’s BBC Radio 2 show Miranda Hart’s Joke Shop), popped up in bit parts in such well-known comedies as Absolutely Fabulous and The Vicar of Dibley before getting her big break as the female lead in the 2006 sci-fi comedy Hyperdrive, opposite Shaun of the Dead’s Nick Frost.

In her eponymous comedy, which is currently filming a third season, the six-foot, one-inch Hart plays a posh singleton who spends her sizable inheritance on opening a joke shop; her eternal quest for love—egged on by her ridiculously insensitive mother (Patricia Hodge)—is fraught with tragedy. Miranda is, in many ways, a throwback to a comedy style long since fallen out of favor, recalling the British comedies of the 70s and early 80s. But there’s a sense of the show being so utterly unhip that it is actually quite cool.

"It now feels like people are allowed to openly like an uncool show,” Hart told the Guardian in 2010. “I just thought, that’s the kind of comedy I love, so why not embrace the genre wholly and go, guys, this is what I’m doing, and you really will have to like it or lump it.”

It’s an attitude that permeates everything that Hart does. The second episode of Call the Midwife, which aired in the U.S. on Sunday evening, introduced Hart’s Chummy Browne, an inexperienced but impassioned midwife who, over the course of the next four episodes, becomes the series’ de facto romantic lead. That is, when she’s not wobbling dangerously on her bicycle on the streets of 50’s East London and delivering babies into the world.

Part of the character’s appeal is that Hart doesn’t look like your prototypical romantic lead, certainly not one on American television, where female love interests tend to be pert and blonde or look like they stepped out of the Sports Illustrated swimsuit issue. Which makes the engaging and kindhearted Chummy all the more remarkable and original. Played with gentle ease and a lack of snobbishness by Hart, the well-off and awkward Chummy emerges as the character the audience is rooting for above all others, effortlessly stealing the show out from under her co-stars as she engages in a chaste flirtation with police constable Peter Noakes (Ben Caplan), with whom Chummy and two other midwives have collided in spectacular fashion.