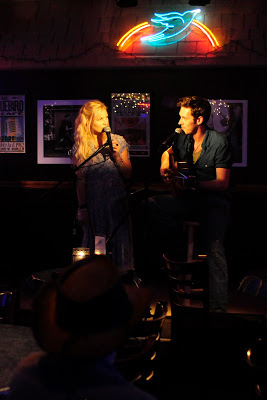 Can’t get that song out of your head? Jace Lacob offers five facts about the stunning duet, a cover of The Civil Wars’ “If I Didn’t Know Better,” in ABC’s Nashville pilot.

At The Daily Beast, you can read my latest feature, "Nashville: 5 Facts About Clare Bowen and Sam Palladio’s Stunning Duet," in which I offer up five facts about the gorgeous duet in the pilot episode of ABC's Nashville last night.

If you watched Wednesday night’s premiere of Nashville—or caught the series opener on iTunes or elsewhere—you know that you don’t need to be a country-music fan in order to appreciate the soapy and seductive Callie Khouri–created drama, which revolves around the battle for dominance between a country-music veteran (Friday Night Lights’ Connie Britton) and a young upstart (Hayden Panettiere).

While the two musical adversaries all but threw daggers at each other in the series opener, Nashsville is not just about the Grand Ole Opry but a canny exploration of gender and age politics in the music industry as well as a mayoral race, romance, and workplace-related drama. It’s also, not surprisingly, also about music, which concerned me as I am far from being a country-music fan.

Britton and Panettiere, however, make the cold war between Rayna Jaymes and Juliette Barnes palpably hot, anchoring the show with their nuanced performances of a woman heading toward the end of her career and another happily stealing away the spotlight. But for all of their quips and sobbing jags, the true clincher in the pilot episode was the breathtaking song—performed by Clare Bowen and Sam Palladio—that came at the episode’s end, one that pointed toward the season’s overall narrative, one that links the ambitions and high-wattage dreams of Britton’s Rayna, Panettiere’s Juliette, and Bowen’s Scarlett.

If you’ve found the episode’s final minutes and that song to be absolutely spellbinding (truly one of the first unforgettable moments of the new season), here are five facts about the song from the end of Nashville’s pilot:

1. While Clare Bowen’s Scarlett O’Connor—a star-struck waitress at Nashville’s legendary Bluebird Café and the niece of Rayna’s bandleader, Deacon Claybourne (Charles Esten)—claims to have written the lyrics as a piece of poetry in her notebook, it is actually a cover of a song by The Civil Wars that Bowen and Palladio perform. The song in question: “If I Didn’t Know Better,” which appears on The Civil Wars’ 2009 live album, Live at Eddie’s Attic.