The Daily Beast: "Downton Abbey: My Tea with Mrs. Patmore" 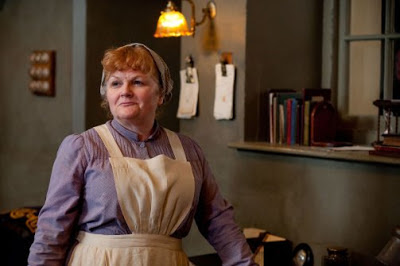 Sipping a cup of Earl Grey, Downton Abbey’s feisty cook spills on the upcoming third season, a potential romance for her character, posing for German Vogue, and more.

"Downton Abbey: My Tea with Mrs. Patmore," in which I sit down for tea with Downton Abbey star Lesley Nicol to discuss Season 3—which returns to PBS’ Masterpiece Classic on January 6—and a potential romance for Mrs. Patmore, posing for Bruce Weber, and the Mrs. Patmore doll.

No, Mrs. Patmore cannot cook. It’s a question that is frequently asked of Lesley Nicol, the 59-year-old actress who plays the uppity cook on PBS’s sumptuous costume drama Downton Abbey.

“There’s a thing in the U.K. called Celebrity MasterChef,” Nicol says, sipping a cup of Earl Grey tea at the London Hotel in West Hollywood. “I’ve been asked several times to go on that. I keep saying, ‘No, you have to be at a certain level before you even think about that, and I’m not there at all. When you look really hard, I’m doing a bit of seasoning, but I make sure I don’t do anything that will look really wrong.”

Over a lengthy afternoon tea service, she tells me a story of a disastrous dinner she cooked for her husband, to whom she has been married six years (“He came to me later on in life,” she says), an attempt to make a prawn risotto that backfired magnificently when she opted to substitute arborio for brown rice.

“This is where being a proper cook is an issue,” she says, laughing. “Before he was around, it was quite understood with my friends that if they came for dinner, they would probably have to finish cooking it because it wouldn’t be ready. I haven’t gotten any better.” Still, she says, “when it’s made with love, it tastes good, doesn’t it? The first meal my husband ever made me was a chicken curry. I have never tasted anything so delicious in my life.”

And Mrs. Patmore, it must be said, loves her job. “She cares very much,” says Nicol, perusing a tower of scones and finger sandwiches. “You don’t ever see the dishes very close up, but they are wild and wacky, some of them, particularly this last season because they’ve had a lady come in to create and design them. What they would taste like, I don’t know, but they look amazing.”

Nicol looks little like her character. On a cloudy Los Angeles afternoon, her hair cascades down to her shoulders, and there is not a single trace of the starched uniform of the stately home’s downstairs brigade, or of the corset she endures for hours at a time.