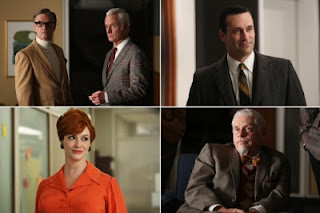 The AMC series’ season ender offered upheaval in the lives of SC&P’s employees. I speak with Mad Men creator Matthew Weiner about the finale and what’s next. Warning: Spoilers ahead!

Not since the end of Season 3 has AMC’s Mad Men—created by Matthew Weiner—ended a season with as much physical, emotional, and psychological upheaval as it did in Sunday night’s episode (“In Care Of”), which closed out the period drama’s sixth and penultimate season.

Written by Weiner and Carly Wray, the final episode restructured some of the show’s key underpinnings: Don Draper (Jon Hamm) spilled the truth about his awful childhood in front of his partners and clients; Megan (Jessica Paré), Pete (Vincent Kartheiser), and Ted Chaough (Kevin Rahm) decamped to California; Don was told to take a break from the agency; Betty (January Jones) pondered the consequences of “a broken home” on her children; Joan (Christina Hendricks) allowed Roger (John Slattery) to form a relationship with their shared son; Peggy (Elisabeth Moss) sat in Don’s office, cleaning up his mess; and Don took Sally (Kiernan Shipka) and her brothers to see the house in which he grew up.

Alternately shocking and elegiac, it could have been a series finale, but instead set up compelling and invigorating new possibilities for Season 7 of Mad Men, the show’s final outing. There is a deep and tangible sense that the characters’ relationships (or lack thereof) with their children are hugely significant, as several storylines examine the ramifications of our actions upon our offspring and the cost of remaining silent. Given our workaholic contemporary society, there would seem to be enormous implications at play here for those who prioritize their professional lives ahead of their familial ones.

The Daily Beast spoke with Weiner about the season finale, Don’s unforeseen departure from SC&P, the murder of Pete’s mother, whether Megan and Pete will be back next season, and much more. What follows is an edited transcript of the conversation.

Matthew Weiner: This season was about the identity crisis going on in the culture, the chaos that’s being brought on the United States, the revolution that’s underway, and the turning inwards that happens that, for Don, is hopefully the beginning of kind of a reconciliation with who he is. He says, “I don’t want to keep doing this,” and we see him acting impulsively, struggling through—with worse consequences than ever—his demons. And what I wanted to do was show, at the end of 1968, the revolution is stopped, mostly by force and by votes and people turning to what they hope is a gentler time. Which we know it isn’t. Don, Pete, Roger, and Peggy to some degree, all of them are facing what they can control in their life and what’s good in their life, which is their children. And the children were a big part of the season.