The Daily Beast: "Oxford's No. 1 Sleuth: Inspector Lewis's Kevin Whately on Morse, John Thaw, and the End of the Series" 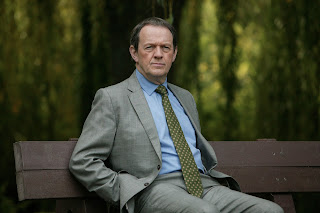 Kevin Whately has been playing gruff, sensible detective Robbie Lewis on Morse and Lewis for 26 years. I speak to him about the possible end of the Oxford copper.

At The Daily Beast, you can read my latest feature, "Oxford's No. 1 Sleuth: Inspector Lewis's Kevin Whately on Morse, John Thaw, and the End of the Series," in which I speak with Kevin Whately, star of Inspector Morse and Lewis (which returns to PBS' Masterpiece Mystery on Sunday) about playing Robbie Lewis for 26 years, whether this is the end for the Oxford-set drama, and what's next.

Inspector Lewis is due for a vacation.

After more than 20 years playing Detective Inspector Robert “Robbie” Lewis, actor Kevin Whately has earned a well-deserved break from investigating murders beneath the Oxford spires. Introduced in Inspector Morse’s first episode (“The Dead of Jericho”), Whately’s Robbie Lewis was the Geordie sidekick of the late John Thaw’s erudite and perpetually cranky Inspector Morse before becoming the lead of his own spinoff, Lewis.

While Whately has a slew of roles on his résumé—he also starred in British drama Peak Practice and comedy Auf Wiedersehen, Pet, as well as countless other projects, including The English Patient—Robbie Lewis is the role still most closely associated with the 62-year-old actor. He has played the gruff detective from 1987 to 2000 on Morse and from 2006 to the present on Inspector Lewis.

The much loved show returns for its sixth (or seventh, if you’re going by the ITV ordering), and possibly final, season on PBS’ Masterpiece Mystery on Sunday, a season that finds Lewis and his partner, Cambridge-educated Detective Sergeant James Hathaway (Laurence Fox), grappling with change, uncertainty, and possibly even a happy ending of sorts.

The Daily Beast caught up with Whately earlier this month during his protracted hiatus from Inspector Lewis to discuss the challenges of playing a role for more than two decades, the romance between Robbie Lewis and medical examiner Laura Hobson (Clare Holman), why he tried to turn down Lewis, and what’s next for the Oxford sleuth.

You've been extremely outspoken about your need for a potential hiatus from the series. What are the challenges of playing Robbie Lewis for 26 years?

Kevin Whately: Every now and then, you suddenly realize you've asked the same question probably 50 times before: “Where were you last night?” We have wonderful writers, but you can't think of a different way to do it, or a different corner to come out of, and you do need a break. I've just recently worked out that I haven't had a summer off for 31 years, which is half my life. So I want a year off for real. And it happened to coincide with Laurence [Fox] saying he wanted to come over and do pilot season over here, but he's actually doing a lot of fathering instead.