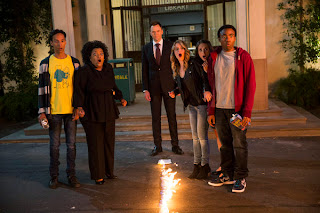 The long-awaited return of the NBC comedy — now back under the watchful eye of creator Dan Harmon — distances itself from its disappointing fourth season. Gas leak year, people.

At BuzzFeed, you can read my latest story, "Community Season 5 Feels Like An Old Friend Has Finally Come Home," in which I review the first few episodes of Season 5 of NBC's Community. (YES.)

I’ll admit that I was somewhat wary when three episodes from Season 5 of NBC’s Community surfaced on my desk last week. After all, the fourth season of the Dan Harmon-created gonzo comedy — which was Dan Harmon-less, after all — left a lot to be desired. I choose to look at it as an alt-reality version of a show that I had cherished in its first three seasons: The characters vaguely resembled that Greendale study group with whom I had spent so many virtual hours, yet they didn’t feel quite right. Something was off — the plots felt too contrived, and the show wandered into a broadness of comedy that it had previously adamantly avoided.

Given that, there is quite a lot riding on the Jan. 2 premiere of Community, which sees the return of Harmon as the showrunner of the comedy he created. Fortunately, the three episodes provided to press — Episodes 1, 2, and 4 — go a long way to reassure fans that the show is once more back in the hands of its true caretakers. (Warning: minor spoilers ahead.)

The fifth season premiere (“Repilot”), written by Harmon and the also returning co-executive producer Chris McKenna, attempts to reestablish Community’s identity after the flawed efforts of Season 4, much of which are explained away as a “gas leak year.” In fact, the episode — which both comments on the efforts of Scrubs to “repilot” itself in Season 9 and utilizes a similar formatting — distances itself entirely from Season 4, intellectually and creatively. As such, the episode has a lot to accomplish in a relatively brief running time, which might be why “Repilot” feels a little overeager and fraught: It needs to not only bring the study group back to Greendale and back together, but it also has to engineer a reason as to why they decide to stay. Bridges, both literal and metaphorical, are broken and mended.