BuzzFeed: "A Girls Lover And Hater Debate The Season 3 Premiere" 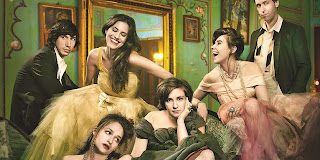 The always buzzed about HBO comedy returned tonight and BuzzFeed’s Entertainment Editorial Director Jace Lacob, who’s looked forward to watching every episode of the series, and Deputy Entertainment Editor Jaimie Etkin, who’s begrudgingly watched every episode of the series, discussed the back-to-back episodes. They agreed on one thing. Maybe two.

At BuzzFeed, you can read my latest feature, "A Girls Lover And Hater Debate The Season 3 Premiere," in which Jaimie Etkin and I hotly debate the two-episode third season premiere of HBO's Girls.

SPOILER ALERT if you have not yet seen the Season 3 premiere of Girls!

Jaimie: I am simultaneously excited and nervous about this. My Girls rage is about to become public knowledge. I mean, I don’t have negative feels about Lena Dunham as a human or woman, but her show just makes me really frustrated. HOWEVER, I must say it was eye-opening to see how people talk to her, as exhibited by the TCA debacle last week. Dunham handled Tim Molloy’s awfully approached question about Hannah’s nudity very gracefully and of all the things I find unrealistic about the show, the nudity isn’t an issue for me. Let’s be honest: Pants are the enemy.

Jace: HA. I’m not bothered by the nudity at all within Girls. (Randomly, I’m listening to Robyn’s “Dancing On My Own” right now, I should add.) To me, it’s an integral part of the emotional reality of the show; Hannah’s willingness to bare herself is not at odds with her interest in baring her emotions to everyone around her. And the scene in the season opener, where she rolls over to answer Jessa’s call, makes so much more sense that she wouldn’t be dressed; there’s more verisimilitude because of it. Why are people still so bothered by the notion that she’s not dressed, three seasons in?

Jaimie: (Sure. “Randomly.”) Because Hannah doesn’t have the conventional Hollywood body type. And as a twenty-something woman who doesn’t either, I appreciate that. That said, I have to be honest and say, that I think it’s incongruous with her very insecure character to be wearing bikinis (as we see in the trailer), some of those short shorts, mesh tops (::cough::), and the like. That, to me, doesn’t make sense for her character. But in the comfort of her own home, it’s very honest to see her not wearing clothes because, unlike in most shows, even on cable, we see someone get out of bed with their partner and put on clothes to answer the phone or something similar, which is just not realistic.

Jace: It’s the magic of the L-shaped sheet that we see so often in television shows! To me, it’s refreshing that Hannah, for her hang-ups in other areas, is very comfortable with her sexuality and her nudity. We should celebrate that, not denigrate it. But the show itself, to me, is refreshing in the honesty of how it handles the dynamic of female, twentysomething relationships. The Hannah-Marnie dynamic — with its embedded animosity and resentments — is endlessly fascinating to me. As is that between Hannah and Jessa. I loved the scene between them at the end of the second episode: anger mixed with relief.