BuzzFeed: "Season 4 Of Downton Abbey Is A Bit Of A Downer" 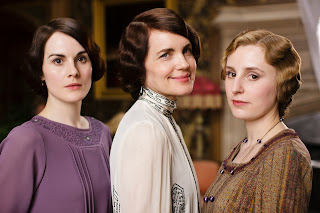 Has the bloom gone off this English rose? Warning: Minor spoilers ahead!

At BuzzFeed, you can read my latest feature, "Season 4 Of Downton Abbey Is A Bit Of A Downer," in which I review the fourth season of Downton Abbey.

After the shocking events of last season’s bloody finale — in which heir Matthew Crawley (Dan Stevens) was unceremoniously killed off — Season 4 of Downton Abbey, which returns to PBS’ Masterpiece on Sunday, Jan. 5, sees an awful lot of restructuring in the wake of not one but two major character deaths. Yes, there are plots aplenty for both upstairs and downstairs as the series is now firmly entrenched in the changing times of the 1920s, when estates like Downton were in even greater jeopardy. When the series returns, the relics of privilege and luxury teeter unsteadily on a knife’s edge as the world advances without them. (There is an electric whisk in the kitchen!)

Season 4 of Julian Fellowes’ Downton Abbey picks up six months after Matthew’s death and finds a family deep within the throes of mourning: Lady Mary (Michelle Dockery) is a ghostly presence in the household, a black-clad widow staring out the window with unspeakable loss weighing on her slight shoulders. And the rest of the Crawleys are concerned about her, plagued by the question of whether to shield her from further hurt or bring her back to the world once more. While Mary and her also widowed brother-in-law, Fenian chauffeur-turned-Crawley hanger-on Tom Branson (Allen Leech) are thrown together in grief, their storyline oddly splinters after a few episodes. While I’m glad to see that the two aren’t forced into a ghastly romantic subplot together, as some fans may have hoped, there’s something strange about the way their familial plot fizzles out.

This is true largely of Season 4 as well. Numerous plots are either resolved far too quickly or not at all, and slight mysteries are left dangling endlessly into Season 5.