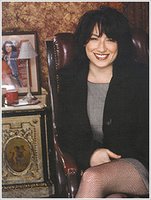 Only a few weeks after leaving the series, outbound Gilmore Girls creator Amy Sherman Palladino has set up her next series project at Fox, according to a report filed by Variety.

The project, written by Sherman-Palladino (who may also direct the pilot), is a half-hour dramedy that will focus on two estranged sisters who come together when one agrees to carry the other's baby.

No studio is currently attached to the project, which is a put pilot at Fox.

The news comes after Sherman-Palladino and her husband Daniel Palladino, a fellow Gilmore Girls scribe/producer, departed the series in April after failing to reach a deal with studio Warner Bros. Television. Sherman-Palladino's replacement as showrunner on the CW dramedy series is Gilmore Girls writer/producer David Rosenthal.

While I doubt that Lauren Graham and Alexis Bledel will be playing those sisters (though wouldn't that be great?), I do suspect that the pilot will feature Sherman-Palladino's trademark whip-smart banter that we've grown to love from Gilmore Girls.

Following the success of the channel's Robert Duvall-led Broken Trail, cabler AMC has announced its first development slate of original series, according to Variety.

Current projects in development at the net include an untitled "hybrid family-horror drama set in suburbia" from Adam and Seth Gross (DOA: Dead or Alive) and executive producer Richard Kelley (Donnie Darko), a noir-ish detective drama from Monster's Ball writer Will Rokos, and an American adaptation of British series My Life in Film from Boston Legal scribe Phoef Sutton.

Additionally, AMC has signed deals to develop a 1970s New York period drama from executive producer William Finkelstein (NYPD Blue), modern horror story a la Rosemary's Baby or The Shining from writer/exec producer Steven Katz (Shadow of the Vampire), a supernatural drama from Peter O'Fallon (Blade: The Series) and writer Dan Sinclair about "what happens with dreams and desires are fulfilled," and a sci-fi series set in the Midwest from Rohan Gavin (Company Man).

Also revealed is the title of the previously reported Warren Ellis-created half-hour dramedy Dead Channel, which is set in a fictional entertainment industry. (Given the horrors of what actually goes on in this industry, Ellis should have a veritable field day.)

The announcement comes as AMC has made particular strides into the scripted series world, acquiring and airing British drama series Hustle and co-producing the 1950s-set advertising drama Mad Men with the BBC. (Expect an imminent greenlight and an announcement regarding the U.S. studio behind the latter, although having seen the original pilot, I'm not all that impressed... but it is good to see Angel's Vincent Kartheiser in a more adult role.) 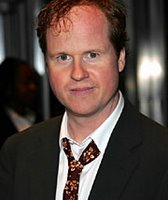 The Comic News Insider's Joe and Jimmy have a podcast interview from San Diego's Comic Con with uber-writer Joss Whedon and his Astonishing X-Men penciller John Cassaday. (Also available via the Music Store on iTunes as well.)

Cue the podcast to around 24:30 to catch Messieurs Whedon and Cassaday at the "geek igloo" of the Marvel booth (though beware of the massive background noise) and catch a few tidbits about the status of Wonder Woman, Goners, the Buffy Season 8 comic, and the possibility of Joss returning to television. ("I'd love to do TV again, I miss it very much.")

Joss will write the first four-issue arc on the Buffy Season 8 comic and then oversee various writers from the series and other media on their individual arcs. The comic will follow the lives of Buffy and her friends "after she has made every potential slayer in the world a slayer and changed the rules... and changed the world literally and she has to deal with what comes next."

It's here, it's finally here! Tonight's episode of my new reality fix, Project Runway, features the dramatic booting of a would-be designer before the elimination challenge. Looks like someone bent (or broke) the rules and now Tim Gunn is swinging the axe. So who is it? As long as it's not Kayne or Michael or Allison, I'm okay.