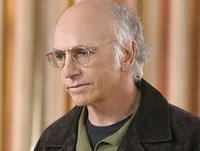 It looks like Larry David has come up with a few more reasons to get bent out of shape.

Pay cabler HBO has reached a deal with Larry David and has officially ordered a sixth season of Curb Your Enthusiasm, according to Variety.

Production on the semi-improvised comedy series will begin in October and all of Curb's cast members, including Larry David, Cheryl Hines, Jeff Garlin and the potty-mouthed Susie Essman are expected to return. No scheduled premiere for the sixth season was announced, but it is expected to return to HBO sometime next year. A total of ten episodes will be produced.

Seinfeld creator Larry David had been unsure about whether or not he wanted to go ahead with Curb Your Enthusiasm after its most recent 2005 season, but was inspired to revive the series. HBO has not said that the upcoming season of Curb will be its last, but that the decision is in Larry David's hands.

Something tells me not to count David out. After all, there are still many, many annoying things for Larry David to get annoyed about in this modern world. And as long as Larry is fumbling and mumbling, I'm watching.