No K-Grease Fire in This "Kitchen" 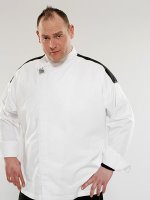 Ah, how the once mighty have fallen.

Keith, he of the too-low pants and, um, casually inventive vocabulary, went toe to toe with the Sultan of Spite and was brutally knocked down. You don't try to take on Gordon Ramsay, especially not on his home turf. Maybe in the line for Pink's (where of course there is no Gordon Ramsay hot dog). But in the fiery pits of Hell's Kitchen? Not a chance.

Just a few weeks back (hell, just as recently as the beginning of last night's episode), Keith seemed like a shoo-in to make it to the final round and have a chance of becoming the executive chef at a restaurant at the "billion dollar" Red Rocks Resort in Las Vegas.

I always find it amusing, first of all, that the show makes a distinction that the winner of this culinary competition will win the title of executive chef (rather than head chef) because Gordon Ramsay has always been rather upfront about the fact that he finds most executive chefs about as useful to a restaurant as rats. (Remember last season's exec chef Chris?) On his other series, Ramsay's Kitchen Nightmares, Gordon is constantly bemoaning the uselessness of many a failing restaurant's exec chef, who most often than not are more involved with management than they are with cooking. So it's an odd reward, especially coming from him.

I had thought for a while that the final challenge would a dramatic showdown between Keith and Heather but Keith really was quite bad at the hot plate and his expediting left a lot to be desired. Heather is a natural, of course, but that's also because she can't help but make demands and bark orders at everyone anyway. But why did she send those lumpy mashed potatoes out? She's too prone to second-guessing herself (she even scolded Mary Ann for making them so lumpy, but failed to actually taste them) and getting herself worked up into a tizzy. If Heather can just calm down, she's actually quite organized and methodical; otherwise, she becomes a destructive maelstrom of terribly lax cooking.

I can only hope that it's Heather who's crowned the victor next week, because if Virginia wins, there is no justice in this Kitchen whatsoever. On the chopping block six times now I believe--a real feat considering that there were only 12 contestants to begin with--Virginia has a palate to be reckoned with, but this isn't Hell's Taste Test, it's Hell's Kitchen and Virginia has proven time and time again that she cannot work on the hot line and cannot keep orders straight and cannot not overcook things... Maybe if she had spent less time flirting with Gordon and more time actually, you know, learning, she would be a stronger contender. (I also cannot believe that she is married, considering the way she's been carrying on.)

And Keith? I think he could have won this. He had finally toned down the cha-ching this and money that and had even pulled his pants up, but he couldn't wipe that stupid expression off his face. Nor did he ever prove that he had any real passion for cooking. For winning, yes, for proving that he could cook "better than all of those bitches," sure. But for crafting a perfect dish? For being an artist? No. I didn't see much of that. But he usually did a fantastic job on the line (except for last week's spaghetti disaster) and he and Heather were a great example of how teamwork can elevate any endeavor. But you don't take on the Devil and expect to walk away unscathed, especially when you intimate that there's something untoward going on between Gordon and a female contestant.

All I can say is Heather better pull through in the finale and walk through that ridiculous "door" to her prize, because I will throw my beloved television out the window if Virginia is crowned the inarticulate winner of this competition. "This whole experience has given me a new skin on life." Um, yeah. May the best chef win.

Next week on the Hell's Kitchen finale: it's down to the final showdown between Viriginia and Heather as Gordon drafts the booted contestants to work under the finalists. Tom (remember him?) refuses to work for a woman but with little choice, he obviously (and thankfully) ends up on Virginia's team. Burning questions abound. Will Keith apologize to Ramsay and step up? Will we be forced to again see Tom sweating into the food? And, oh, yeah, who will win?

The whimsical new sci-fi drama that's more Northern Exposure than Stargate. On tonight's episode ("Alienated"), Carter investigates Spencer's abduction claims while Eureka may face an even greater challenge: their finances are in danger.

In tonight's episode ("Death and Nurses"), Alice is set up on a date by her perfume counter co-workers, while Gil attempts to write a new script. Will these two pre-destined lovers ever meet?

Anonymous said…
I'm sorry...a Hells Kitchen writeup without mentioning that Keith, upon being cut, told Gordon Ramsey he thought Ramsey wanted to f*ck Virginia? That might have been the highlight of the season!
8/08/2006

Jace Lacob said…
Greebs, I'd never do that to you. It's in there:

"But you don't take on the Devil and expect to walk away unscathed, especially when you intimate that there's something untoward going on between Gordon and a female contestant."

Anonymous said…
Fair enough! I actually thought Keith was going to take a swing at Gordon at first, but the comment was all the much better...and yes, the fact that she's married is somewhat insane. I would not be a happy camper if my wife openly flirted like that on national TV.
8/08/2006

Anonymous said…
From your blog yesterday:

"So who will the final two be? If it's not Keith and Heather, I'll eat at Hell's Kitchen. Seriously."

Anonymous said…
Virginia is so incredibly dense it's no wonder she can't work on the hot line. Her whole "why do I want to stay, because I freaking want to!" tirade sounded like an insolent 6th grader. I despise her and her shameless flirting. Heather annoys me as well, but at least she knows what the hell she's doing. Ugh!
8/08/2006