Michael Finally Gets Some Love on "Project Runway" 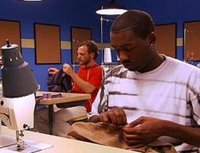 Every now and then on a reality TV show, there's a contestant who is so fantastic, so amazing, that you can't help but root for them, even if the judges seem to be looking the other way. One of those is Project Runway's Michael, whose designs are consistently beautiful but never seems to get any acknowledgement from Heidi, Nina, and the other judges.

Until last night, that is, when the 28-year-old, German-born designer presented a fabulously modernized look for icon Pam Grier, complete with magenta hot pants. (I kid you not, they were outrageously beautiful. Even Diane von Furstenberg thought so and she "wore a lot of hot pants" back in the day.) I've had my eye on Michael Knight as a dark horse competitor since Day One, when his model sashayed down the runway in a provocative dress made entirely out of coffee filters. It was a sight to be seen and even these jaded eyes couldn't help but take notice of Michael's skill.

But still, while he was consistently placed among the majority of the "in" candidates, none of Michael's designs ever got selected to be in the top 3, which always baffled me. Don't get me wrong. I love Kayne and Allison and Uli as well, but Michael has a certain je ne sais quoi. His designs are always tasteful, always beautiful, and completely wearable (well, for some women, anyway). And he has consistently remained true to himself "as a person and as a designer," refusing to get dragged into the petty catfights between Jeffrey, Laura, and Angela (whose "Audrey Hepburn" was okay, if a little predictable), focusing instead on the competition on the catwalk.

Then there's Bradley. Or as I like to call him, Major Tom, the spaciest space cadet on reality television who seems one bobbin away from a pot-induced high at all times. Is he insane? Baked? Or just really, really fried from too much pot? Bradley is always frazzled, always moving at a glacial pace, and his designs are usually really, really sloppy. (I'm still stunned by his near-victory two weeks ago when he slapped some fabrics together and threw his model down the runway. Talk about luck.) Last night, he presented a look for "Cher" that was, um, disastrous from start to finish. A silver lame-like top seemed as spacey as Bradley, with a completely misguided fringed white pant that was sloppy and unfinished. (And what was up with the crotch?) It had zero to do with Cher and nothing to do with style. It was an embarrassment and far worse than poor Malan's tree stump dress that got him booted in Week Two.

As for the other bottom 2? Vincent is not long destined for this competition and I am constantly amazed at how he keeps squeaking past elimination. His "Twiggy" dress was a monstrosity and even returning judge Michael Kors (there he is!) couldn't help but be horrified by the messy pockets on the dowdy dress. Plus, you don't refer to a still-very-much-alive-and-on-America's Next Top Model, um, model in the past tense. Not cool. I've been really disappointed in Robert these last few weeks. He showed such promise at first but now he's consistently ranked at the bottom of the pack. What happened to that beautiful robin's egg blue fabric he purchased? Why on earth would he take Vincent's linen for an outfit inspired by Jackie O? Such questions remain mysteries as no one called him out on these shocking sartorial choices.

While I'm still pondering those imponderables, I am really overjoyed that Heidi, Michael, Nina, and Diane von F. bestowed notice on Michael. As long as he keeps his act together and stays focused on the prize, he could win this. But if Kayne stays out of Pageantville, USA, he could give him a run for this money. And don't discount Allison or Uli either. Both of them have had some amazing near-victorious and/or victorious designs these past few weeks.

The field is still wide open and I am loving every second of it.

On tonight's repeat episode ("The Professor"), Earl accidentally destroys a bus stop sign but gets distracted by a beautiful college professor (guest star Christine Taylor) and karma takes revenge on poor Earl. It's one of my favorite episodes and it's got Christine Taylor and bees. What more could you ask for?

On a repeat of The Office ("Dwight's Speech"), Dwight turns to Michael for advice when he is asked to give a speech at a big sales convention. Asking Michael for advice on public speaking? Isn't that a bit like asking Project Runway's Keith for lessons on ethics?

If you missed this repeat episode of Iron Chef America, featuring Bobby Flay being challenged by last year's Hell's Kitchen runner-up Ralph, here's your opportunity to catch it. You know you want to.

Anonymous said…
I so agree w/everything you said about Michael. He's been my favorite since day one. At first it was just cause his name was Michael Knight, and you have to root for that, but ever since the coffee filter dress I have been rooting for the man as well as the name.

I was SO happy he won last night. his outfit was perfect.

Robert - ugh. he has been lucky two weeks in a row. BAck to back hideousness.

I hate to say say it, but I kinda loved Angela's dress. And this was all her this time. Maybe she was just being coy all this time and she is really a ringer. Nah.
8/10/2006

Kat said…
I too have been rooting for Michael - I have him in my Final 3 (already!) He knows a woman's body - and appreciates the curves like no one else on this season has.

I have to admit - I thought Michael would be on the chopping block this week, because he had so much airtime...until I saw his completed outfit on Nazri! Then, I knew he was going to win. Kayne's was pretty - but what was up with the bunching on the rear?

Laura is also up there for me...she's really sophisticated, and her clothing is impeccable. You will never see a missed hem from that girl. The fight between Jeffery and her was not what the previews were making it out to be.
8/10/2006

Anonymous said…
Yay for Michael. I, too, have loved his designs from the beginning and was getting a very dark horse/Daniel V. vibe from him. Glad he's finally on the judges' radar. My faves are definitely Michael, Kayne, and Allison.
8/10/2006