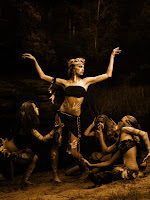 No, I don't want to talk about it.

Sure, I was happy that it was Jaslene who was crowned the winner of the eighth "cycle" of America's Next Top Model, rather than Natasha, whom I cannot for the life of me imagine or picture as a model, with her pigeon-walk and... odd facial expressions. Sure, she's spunky and has a great "backstory" but that does not a model make.

Basically, I am shocked and stunned that Renee didn't even make it to the final two. That Tyra--with a straight face--actually said that the decision came down to the girl with the bubbly personality and the girl who always takes amazing pictures completely blew me away. In one fell swoop, she basically undermined any credibility this series had. It's almost as if they were grasping at straws for reasons to eliminate Renee (I see no examples of the "puffiness and wrinkling" that Tyra mentioned) in order to ensure that Jaslene would win this competition.

Anonymous said…
I think reality shows have a life span of no more than 5-7 seasons. ANTM's is up. That goes for your too American Idol.
5/17/2007

Anonymous said…
I think they had Jaslene picked as the winner from the start. It's the perfect story since she tried out before and didn't make it. Reality TV is made for that stuff.

While I'm not mad that Jaslene won I am very upset that Renee didn't make it into the final two. She was by far one of the strongest and most photogenic competitors. And I can't believe that the judges said that, although she had the best commercial and photo that week, and although she had some of the best pictures of the competiton, they were going to pick the girl with the "bubbly personality" over her. Color me confused. Does anyone else smell a set up?

But I was very impressed by how Renee handled herself afterwards. You could tell she was pissed but still remained articulate and dignified and I really liked her final words of wisdom. Hopefully, she will go far in spite of, instead of because of, ANTM.
5/17/2007

Anonymous said…
Well, you know I couldn't stand Renee, so I wasn't sobbing over that one. And I did like Natasha. And I didn't like Jaslene. So, really, it sucked.
5/17/2007

Anonymous said…
I'm with ya, T. I completely lost interest once Renee got the shaft. She was robbed and should have been in the final two. That seems to be a popular opinion so hopefully she'll still work, and she won't have the burden of being ANTM.

Caridee was the first blonde to win in seven seasons, so it's not surprising that they wouldn't follow Caridee with another blonde. (Before you doubt, my friend tall brunette friend went to an Idol audition this season and they were open about not wanting people who looked like Katherine McPhee or Taylor Hicks.)

Tyra is no idiot and surely she is aware that the Hispanic market is the fastest growing market in the US. Jaslene may not be the brightest bulb in the box, but she is fluent in Spanish.
5/17/2007

Liat said…
I just think Renee was too much like Caridee to get to win. And Jaslene does take good photos.

However, what I'd really like to see is a 'where are they now' story about what the girls are up to, 'cos I never see them in any magazines after the show. I don't think this show is creating any working models, and that's weird, because it should be. Certainly the girls should be more memorable and experienced at go-sees. So what is happening?
5/17/2007

Anonymous said…
just like idol, apprentice, etc. all the really good people have already been discovered, are working, and don't need this to make their career. so you end up with phony ex-hookers like Nastyasha. that said, Jaslene was the closest thing they have had yet to a real high fashion model look.
5/22/2007