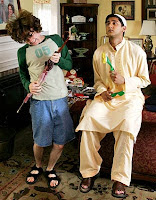 Ah, the CW. I can't tell you how angry I am with this whole Veronica Mars cancellation deal. Seriously, I know you're trying to give the fans a (false) sense of a reprieve while Rob Thomas goes off and writes a script while you wait out the clock on the actor's contracts (June 15th and ticking!), but I wish you'd have the guts to just be honest.

There. I've made my peace. Now onto what you really want to know: just what will the CW look like in its second year on the air? (Answer: Rather similiar to what it did last year, just without any series with critical traction.)

Rather than wait those few minutes until CW's official upfront presentation, here's a look at their official schedule now.

New Timeslots for Returning Series:
Beauty and the Geek

Reactions:
To be totally honest, I don't have much to say about the announced lineup. I love Beauty and the Geek and America's Next Top Model but there's nothing else (save, maybe Chris) that is going to get me to tune in anymore.

Some of you will have your favorites (I know there are a lot of Smallville and Supernatural fans out there), but there isn't a single new series on this lineup that interests me in the least. The script for Gossip Girl was decent, if not my cup of tea, and I'll be seeing the pilot next week so I'll make my final decision then.

The CineManiac said…
I'm glad to see Smallville & Supernatural returning, and I know my wife will be happy to see the return of One Tree Hill (Which I enjoy watching with her) and I'll be seeing Beauty & the Geek but seriously who cares about anything else?
The only reason I'd tune into Gossip Girl is to hear Kristen Bell's narration.
The CW has really disappointed me and if they don't bring back Veronica Mars I really hope every single one of it's new shows fail miserably.
5/17/2007

Anonymous said…
This seems almost as hopeless as NBC's schedule and they at least have a genuine hit in Heroes.

Life is Wild seems like an almost directly replacement for the family friendly drama slot taking over from 7th Heaven.

Gossip Girl, about rich kids with Josh Schwartz as an executive producer seems positioned to be an OC replacement. Scheduled against Criminal Minds and Private Practice eyeballs are already getting scare in its time slot. Indications are the American Idol spin-off, America's Next Great Band, make take up residence in this slot over on FOX. You might as well just put in some keep reality program like Farmer Wants a Wife there now and save a few bucks.

Reaper, has some buxx going right now since Kevin Smith was involved with the pilot however I can not see this performing any better than Veronica Mars did long term.

The leaves Aliens in America, a hold over from the 2006/2007 pilot season. It has Everybody Hates Chris as a lead-in which has struggled to find a large audience even though it was one of the better comedy pilots two years ago. It is also being put in the middle of the historical block of comedies aimed at an ubran audience. It really seems like a fish out of water. Given that comedies on CW seem to limp along all season unnoticed look for this to make it through the first season then to be canceled.

Overall, look for CW to come back to upfronts in a year scartching its head on what happened to its audience.
5/17/2007

Anonymous said…
Everybody Hates Chris is the only non-reality show left on the CW with any merit. Gossip Girl might be okay but I'm not holding my breath.

Anonymous said…
I love Supernatural, so I am happy about its return. However, I am a bit bummed that it is staying in the Thursdays at 9pm slot, even though I understand the logic -- a new show would get murdered there. I just think Supernatural has the potential to grow into a more solid hit in a different time period, because when it ran on Tuesdays in its first season it averaged at least a million more viewers. Oh, well. At least it is still on the air.

I'm bummed about the cancellation of Veronica Mars, but can you blame them? The ratings were abysmal. It got renewed twice despite terrible ratings. The CW is, after all, a business. I'll miss the Neptune gang, but you can't really blame them too much for the cancellation. For some reason, America just didn't want to watch that great show.
5/17/2007