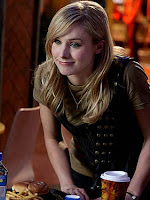 Those of us in LA fortunate enough to be far away from that awful Griffith Park raging fire tuned in to the CW last night hoping to get our minds off the fire by catching up with our favorite blonde sleuth. We were in for a bit of a nasty shock as the CW pre-empted the telecast in favor of the local news.

The episode of Veronica Mars ("Debasement Tapes") is up on the CW's website for those of you who can't wait for the televised version, but regardless, be sure to tune in to the rescheduled airing as we need to keep those viewing numbers up. (UPDATE: KTLA will show the episode in its entirety this Saturday at 9 pm.)

Meanwhile, the Hollywood Reporter is indicating that Veronica Mars is inching ever closer to a fourth season renewal, following a "warm reception" at the network towards the trailer focusing on Veronica as a Clarice Starling-style FBI agent in training. As previously reported, the new direction, envisioned by Rob Thomas, would propel the plot several years into the future, where Veronica would be studying at the FBI Academy.

Unfortunately, that means that Kristin Bell's Veronica would likely be the only character to make the jump, should the series return next season, a sobering prospect. With only a few episodes to go (and Veronica Mars' future unclear until the CW announces its fall lineup next Thursday morning), it looks like we'll possibly be making our peace with Mac, Logan, Wallace, Keith, and Piz, regardless if the series is cancelled or not.

The fate of the series also seems a little rosier now that the CW has announced that Gilmore Girls won't be coming back next year, so keep your fingers crossed that this new FBI angle really has wowed Dawn Ostroff and her ilk enough to keep our Veronica around for another year... Especially as Veronica Mars would be a fantastic companion for Gossip Girl, which from all indications seems a lock for a series pickup.

On tonight's episode ("The Girl Who Does Not Want to Dance"), the final four models learn a valuable lesson about self-expression and storytelling from some Aboriginals and, when Natasha gets sick, the other three girls spent a night on the town trashing Nata behind her back.

Lost is more than back on track for me. On tonight's episode ("The Man Behind the Curtain"), Ben introduces Locke to some of the island's secrets with a trip down memory lane, including some Dharma-related revelations and the identity of the mysterious Jacob, while Juliet's secret is revealed to the castaways.

Cass said…
i noticed amy sherman-palladino got an executive producer credit on last night's gilmore girls. does this mean she had some involvement in that truly awful episode? as much as i want the show to end, i hate that it is ending this badly. and what was going on with that super cold break-up between rory and logan? i mean, i knew matt czuchry was a horrible actor, but come on man. i just hope he doesn't come popping up again in the final episode. and i don't know how they are going to pull the rabbit out of the hat with the luke and lorelai reconciliation (since there hardly seems to be any chemistry between them right now.)

on the other hand, last week's lorelai "i will always love you" serenade was maybe one of the best moments out of the entire year. too bad it wasn't followed by anything good.
5/09/2007

Anonymous said…
I already have a tape of both shows on its way. It's good to have east coast friends. :)

I did catch a blurb at the end of the VM telecast, where Hal Fishman announced that GG and VM would be re-airing and "we'll let you know when that will be." I am sitting at my desk awaiting a call from Hal.
5/09/2007

Anonymous said…
Hmm...I feel conflicted about the Veronica news. I definitely want the show to continue but am not sure about the new concept. I do like the idea of Kristin Bell as an FBI agent in training but I would really miss Veronica's relationship with her dad. To me, that is such a huge part of the show. But I'm willing to put my trust in Rob Thomas and hope for the best.
5/09/2007

Anonymous said…
Would they keep the same theme song? It would finally make sense. "Along time ago, we used to be friends…" Sigh. I'll miss Logan, Mac and Keith, but I eagerly await seeing Veronica back in the role of the underdog. And just imagine: when Veronica is at her lowest point dealing with life at Quantico, Logan could drop in announced. How great would that be?
5/09/2007

Unknown said…
danielle, I totally agree with you. I'm anxious about the new format, but I love VM so much that I'll, of course, give it a shot.

tom i., I'm afraid I couldn't disagree more. IMHO, if they make the break to the FBI academy, nobody should "drop in." They should rely completely on new cast members and build it into--almost--a new show.
5/09/2007