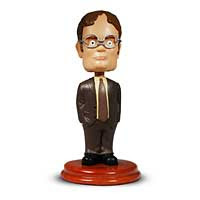 Yep, you read that headline correctly.

NBC Universal has licensed the rights to comedy The Office to gamemaker MumboJumbo, which plans to translate the series into a "humorous game in which players have to handle jobs and play pranks at Dunder Mifflin's Scranton branch."

The company has also acquired rights to The Office cast's likenesses and plans to portray Michael Scott & Co. as bobblehead dolls in the game. Likewise, the game will feature clips from the series.

MumboJumbo already has plans for sequels in the near future and will release its Office game not on platforms like PS3,Xbox 360, or Wii, but rather on handhelds like PSP and Nintendo DS. Players will also be able to download the game from various websites.

I'm not quite sure how I feel about the random news but I'm keen on anything Office-related that raises the series' visibility. As for others, I wonder how many seconds of gameplay it will take for players to throw Jim and Pam together...

Anonymous said…
Hi, I was browsing the Web and came accross your site. I am pretty new to blogging and everything but it seems pretty fun. Great blog. Well, keep on blogging! If you interrest to learn German, please visit my website.

The CineManiac said…
You've been Spammed!!!!
As for the Dunder-Mifflin video game, I'm not sure about it, kinda sounds stupid to me. But since I don't own a PSP or a DS I probably won't have to worry about it.
6/20/2007

Anonymous said…
I think it would work better as a Simms kind of game where you become one of the Office characters and live in Scranton and get points for being on time to work or pulling a prank on Dwight. The idea is kind of funny but I don't know if it would really be that interesting to play. Especially on a smaller device.
6/20/2007

Anonymous said…
If you are going to learn German, do not follow spam sources. Or you end up using Borat-like language. Correct German: