"Hell's Bitches": Ramsay Doesn't Like the Cut of the "Hell's Kitchen" Competitors 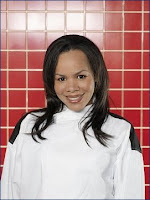 I'll admit that while I watch Hell's Kitchen, I'm always slightly baffled by the fact that the culinary competition series, which launched last night on FOX, rewards its participants with their very own restaurant (or at least running the kitchen in someone else's restaurant) when the series essentially tests them each week by... forcing them to work on the line?

It's particularly jarring given that Bravo's own Top Chef, which is going into its third season as well, launches next week. Though it lacks the explosive personality of Gordon Ramsay, Top Chef seems more inclined to cast people with, you know, actual talent. Here on Hell's Kitchen, the producers seem much more inclined to cast "personalities" rather than competitive chefs. How else to explain the dog's dinner that the aspiring HK winners presented to Ramsay in the guise of their "signature dishes" or the fact that more than half of them seem incapable of cooking an egg properly?

Part of me almost wishes that these contestants were merely passionate amateur chefs (competing, much like they do on Ramsay's other series, The F Word). It would explain the difficulty they have with some basic cooking directives (why on earth would night club chef Vinnie think it all right to add water rather than stock to risotto?) and give the audience some people to sympathize with and root for. As it stands now, I can't imagine any of these people owning (or running) their own restaurant.

Sure, there are one or two stand-outs who already seem to tower over the competition in the form of 25-year-old sous chef Brad from Scottsdale (who took over the blue team's appetizer station with relish and got out their only dishes), and 29-year-old line cook Melissa from New York, who quickly took charge of her squabbling team after Ramsay put her in control of the red kitchen. So far, these have been the only two to stand out among the pack, which seems once again stacked with incompetents, smart-asses, and... people who seem to burst into tears at the drop of a hat.

I was stunned--nay, gobsmacked--by the fact that 48-year-old Aaron, a retirement home chef with a penchant for cowboy hats, started sobbing uncontrollably... before the first dinner service had even started. Seriously. I'm not quite sure what to make of that, but if you can't keep it together before the stress of service has even begun, what chance to do you have once you're in the weeds? (Though I was particularly impressed with Ramsay's concern for Aaron, which cropped up not once, but twice, during the premiere episode.)

The same holds true for 28-year-old short-order cook Julia, who also started crying during service when no one would let her cook the quail eggs. I'll admit that I did feel bad for Julia, who seems to be the victim of the other contestants' stereotyping. She was all but ignored during the prep time and during service, relegated to chopping apples while the other chefs couldn't cook an egg; she continually offered her help but was brutally rebuffed (yes, I was just watching Clueless) at every turn. Um, guys, if there's one person that could cook an egg perfectly nearly every time, it's probably a short order cook. And, sure enough, Julia managed to get the eggs cooked, but only after having a breakdown in the kitchen. I am sure that the stress of the situation, as well as being ostracized by her own team, played a part in that, but these people have got to keep it together, especially in front of Ramsay, if they want a ghost of a chance at winning.

I was perturbed that everyone--from Melissa to uppity 22-year-old chef's assistant Joanna and ousted 27-year-old kitchen manager Tiffany--kept putting Julia's background down as coming from a "waffle house." After all, Season One winner Michael didn't exactly hail from a fine dining institution and he won the top prize. I'd advise them to stop concentrating on where Julia's from and start focusing on what the hell they're doing, because I haven't really seen any culinary genius stemming from any of them, culinary school graduates or not.

All I can say is that these Hell's Kitchen would-be master chefs better step it way up because any single one of the Top Chef competitors would blow them out of the water in terms of skill, creativity, and vision. And with that other culinary competition show launching next week, these chefs better find their knife skills fast. I also wish that HK would mix things up a bit more; the battle of the sexes... again? I'm not looking for Survivor-like twists and turns but a little shake-up in the general order of things would be nice.

Next week on Hell's Kitchen, the teams prepare for the next challenge after a disastrous opening night while Aaron, unable to cope with the mounting pressure, tries to quit.

Missed MI-5 (aka Spooks) the first time it aired (if you can call it that?) in the US on A&E? BBC America is giving you a second chance to catch this taut espionage series from the beginning. On the first episode ("Thou Shalt Not Kill"), MI-5 must stop a rabid American pro-life supporter from detonating twenty bombs in the UK. On the second ("Looking After Our Own"), Tom and Helen are tasked with posing as a married couple in order to stop a maniac from starting a race riot.

I'm still so bloody angry at the CW I can taste it. But before Veronica Mars disappears off the airwaves completely, catch the few summer repeats while they last. On tonight's repeat episode ("My Big Fat Greek Rush Week"), Veronica is tasked by the campus newspaper into doing an undercover expose during Rush Week on a sorority that might just have a link to Parker's rapist. Or maybe, you know, not.

Unknown said…
I watched HK because you like it so much. Gordon Ramsay is great. I can't believe he tolerated ANY crying! I woulda bounced wussy boy Aaron outta the kitchen the minute the waterworks started. And I thought it was atrocious that the women cried too! It's surprising how inept most of the contestants are.
6/05/2007

Danielle C.F. Maris said…
I'm a big Gordon Ramsay fan but I do feel that Hell's Kitchen is getting stale and overly theatrical. I cannot believe that Gordon would put up with Aaron crying like that. I thought he would have kicked him out on the spot. But obviously they're going for drama over talent.
6/06/2007

Anonymous said…
You said it. These "chefs" could not even cook in the same kitchen as the Top Chef crew. Crying? Can't cook an egg? What are you doing on a cooking show, much less in a pro kitchen?
6/06/2007