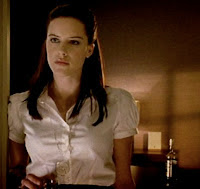 I might be the only one out there but I really, really enjoyed Jekyll, Steven Moffat's take on the classic Robert Louis Stevenson story of Dr. Jekyll and Mr. Hyde, which wrapped up its six-hour storyline this past weekend. (Shame on you for missing it!)

While I've been fairly effusive in my praise of the BBC's limited series, I was struck by something in watching the taut thriller these past few weeks: why is it that Michelle Ryan--who plays Dr. Jackman's lovelorn psychiatric nurse/companion Katherine--looks so absolutely smoking in this production and so... dowdy in her new NBC series, Bionic Woman?

Sure, her Bionic Woman character, Jamie Sommers, is meant to be painfully average, a true sign of her role as an Everywoman, but does she have to be quite so average? Our girl Jamie may have just had a significant portion of her body upgraded to bionics following the whole attempted murder/car accident incident, but I am sure she can find the time, between leaping tall buildings and mixing drinks at some drive bar, to put on some eyeshadow, slip into something from the Buffy Summers collection of crime fighting, and glam it up a bit.

I'm positive that somewhere down the line, Jamie will make the crossover from smart and sensible to sleek and sexy but it's a shame that the series' pilot portrayed Jamie as rather a bit of a sad sack in sweatpants. It's not just the outfits, mind you, it's the general aura of naturalistic beauty that the series' producers are aiming for; had Ryan's beauty been a little more attainable from the start that might have made more sense. As it is now, it's just simply shocking to see how completely different these two characters look. (Not quite her Charlize Theron-in-Monster moment, but you get the gist.)

What do you think? Is NBC giving Michelle Ryan's beauty the credit it deserves or are they trying to downplay her looks a little too much?

Season Two of Eureka continues tonight with "E=MC...?," in which an experiment typically goes amuck and the consequence? Oh, just the dawn of the universe being re-created. Did I mention that some antisocial genius in Eureka will have to save the town? Yeah, there's that too.

Okay, I know this is unexpected but I can't help but watch the crazy people in this topsy-turvey world. In this week's episode, Jeff rushes to try to close not one, but two deals and move the focus of his burgeoning business to include Palm Springs. But when the cat's away, the mice will play and Jeff's staff creates some significant damage with their partying ways.

Anonymous said…
I am not sure what the deal is with Bionic Woman. I really want to like the show but I found the pilot to be really dreary and slow. It didn't help that Michelle Ryan was made to look far less pretty than she is in real life. I don't know if she was too good looking to believe in the role or if they are waiting for sweeps to make her look kick ass and stunning. Either way I completely agree with your assessment. Let her look natural but beautiful rather than dowdy and dull.
8/28/2007

The CineManiac said…
Having watched the Pilot of BW and the first 3 episodes of Jekyll I have to agree that Michelle Ryan looks much better on the BBC show than the NBC one.
8/28/2007

Anonymous said…
It's not going to be her looks that save or sink the show. It's as geekchick mentioned... it's utterly without levity or humor. There's no rest from the constant drama and dreariness. The only show that can get away with that is BSG.
8/29/2007

Jon88 said…
If you missed the broadcast, wait for the "Jekyll" DVD release. BBC America cut some ten minutes from every 55-minute episode. Barbarians.
8/29/2007

Anonymous said…
This is a mystery to me as well ... when I first started reading all of the comments about how beautiful Michelle Ryan is, I had only seen the photos from the original Bionic Woman press release and had no clue what people were talking about. Now that I have seen more BBC footage and event photos, however, it is clear she is stunning. I am not sure why they chose to make her BW character seem "unaccomplished" in so many ways (in addition to her looks) before her bionic implants, but it is very puzzling.
8/29/2007

Page48 said…
Having watched Eastenders for years, I'm used to Michelle Ryan being presented in a less-than-glamorous role, but the fact is, no amount of dressing down can hide the fact that she is smokin'.

I don't find her at all unattractive in BW, but I know what you're saying about not exploiting her attributes.

Many of the recently released promo photos from NBC show her upping the ante in the hotness department. I currently sport a wallpaper of MR standing beside a police car looking like the kind of girl I would hire without an interview.

I watched "Jekyll" for the sole purpose of seeing MR in a role other than Zoe Slater and I thought the series was great. James Nesbitt was excellent, I loved the humour he brought to the Hyde character, and Michelle, as you say, was a sight for sore eyes.

I saw the BW pilot (the deaf sister version), and I thought the dialogue was hopelessly lame. I recommend that the writers go to the archives and watch the pilot of "Alias" and then come back and try this again. Of course, I realize it's too late for that, but if BW is to enjoy any longevity, heads need to roll in the writing department and soon.

I still have great hopes for this show to scratch my Sydney Bristow itch, but after watching the pilot, my confidence is waning.
8/30/2007

Anonymous said…
I don't think she looked average in the Bionic Woman pilot to be honest and to glamourise her i don't think would be a good idea. Jaime is supposed to be an ordinary woman - thats the point. Maybe they will glam her up later on in the series. But i'm happy with the way she looked in the pilot tbh.
9/04/2007

Gurn said…
No, you're not the only one who liked jekyll, or thought she was really hot in it.

Page48 said…
gurn, let's turn that question around and ask if we can expect to see Michelle Ryan and Miguel Ferrer in BSG in the upcoming season. Why not?
9/11/2007

Unknown said…
In Bionic Woman Michelle looks startlingly sexy in the one-arm pull up scene. I think that may be episode 2 though.
3/02/2008