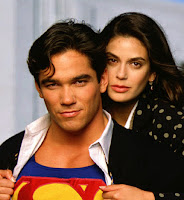 The former Man of Steel, who played Clark Kent on ABC's short-lived series Lois & Clark: The New Adventures of Superman, will head over to the CW's Smallville for a guest starring role next season.

Curtis Knox. Coincidence that he and Clark both share the same initials? Or are the producers hinting at some other connection between them? Hmmm.

Smallville returns to the air(waves) on Wednesday, September 27th at 8 pm.

The CineManiac said…
Personally I think this is amazing news, Cain is good friends with a friend of mine (their sons are best friends) so hopefully I can get some good scoop in the coming weeks.
8/02/2007

Anonymous said…
I'll never udnerstand why Dean Cain didn't do more in the industry after Lois & Clark ended. He brought a lot to the table. I still remember liking him as "Rick", Brenda's love interest when her and Donna went to Paris in the 2nd season of 90210. And didn't EW readers go nuts on the magazine until they agreed to put him on the cover?

The early 90's were definitely some good times to be a Dean Cain-head.

Anonymous said…
I love Dean Cain and would watch him in anything, especially when he takes his shirt off. Any chance of a shower scene with him and Tom Welling?
8/02/2007

The CineManiac said…
Jay & Maggie,
You can see Dean in the new movie September Dawn (as Joseph Smith) out the 24th of this month.
But be warned if you're a mormon you will not like this movie. I'm pretty sure it won't be playing in Utah.
8/02/2007

Matt said…
I stopped watching Smallville a while back and even if Dean Cain's on it I probably still won't watch. But I am glad to see him back on tv. That guy was a superhero I could relate with, in a manner of speaking.
8/04/2007

Anonymous said…
Jay
The only mainstream film Dean was in to date was 2003 'Out of Time' with Denzel Washington and Sanaa Lathan. He did very well in his role and even held his own against Denzel, which is not easy to do.
11/21/2008