Meditations in an Emergency: "Mad Men" Returns with a Bang 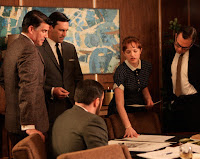 While I may have fallen asleep on the couch the other night before the start of Mad Men's sophomore season premiere ("For Those Who Think Young"), the wait to catch up with the men and women of Sterling Cooper was definitely worth it.

While about fourteen months have passed since the end of Season One, life as we know it (for the most part) has remained unchanged since we last saw Sterling Cooper... on the surface anyway. And that's what makes this gorgeous series pop: that the action, the dreams, the foibles, and the triumphs of its characters remain locked within the smaller moments, rather than the grandiose. Don Draper ducks out of a lunchtime meeting for an insurance physical... and ends up having lunch by himself in a dive bar (he later picks up a copy of Frank O'Hara's "Meditations in an Emergency" that another diner at the bar was reading). Peggy Olsen lords her newfound "power" over Don's new assistant. Joan coolly tells Roger Sterling that who she is seeing is none of his business. Betty pretends to be more cosmopolitan than she really is when she tells her friend Francine (Anne Dudek) that her former roommate (they were models together, as she tells us more than once) is now a call girl. Oily Pete Campbell hands his wife a box of Valentine's chocolates and tells her to open it now because he wants one.

It's the small moments like these in Mad Men that clearly define the characters and their world. The biggest change to life at Sterling Cooper is of course Peggy's promotion, which she sees an opportunity to stand on equal footing with the boys (they clearly don't see it that way) and a means to make Don proud of her. (Daddy issues, anyone?) That she then uses her newfound position as junior copywriter to humiliate Don's new secretary is a shocking instance at how cold and cynical she's become, but watch the way her eyes narrow and her shoulders slump when Pete Campbell asks her if she wants kids and you realize that the old Peggy Olsen is still there, behind all of that armor. The truth of her familial situation (Peggy secretly gave up the illegimate son she had with Pete) clearly still smarts, even as Pete and the others try to hazard guesses as to the source of her mysterious weight loss. Fat farm? Hardly.

The other change at the office is the rise of Herman "Duck" Phillips (Desperate Housewives' Mark Moses) and his business ethos. He wants younger accounts execs, wants to change the way that the ad business has always been run in the name of "progress," stating that the clients are asking for it. The scene between Roger and Don when they discuss the vacant-minded youth of the era crackles with frustration and jealousy.

Despite being hired by Don, Duck clearly is making himself an adversary to Sterling Cooper's creative director who himself is going through some issues of his own. A Valentine's night romp with Betty turns sad when Don finds himself unable to seal the deal, as it were, a problem he never has in the boardroom or had in the past, when he had other outlets for his sexual needs. Whatever happened with Betty's confession to her shrink that she knew Don was cheating has produced some markedly changed effects in Don: he comes home on time, seems to have sworn off other women (more on that in a second), and is being much more considerate and tender towards Betty than he was last season. The look of wonder and love on Don's face when Betty enters the bar looking all the more like Grace Kelly was a thing of beauty.

And yet something is missing, for both of them. That Don can't perform seems an indication that that all is not well in the Draper marriage; could it be possible that his extramartial affairs actually intensified his love for his blonde, perfect wife? And could it be that Betty--though furious at Don for going behind her back and talking to her psychiatrist--misses the old days when he was distant but exciting? Hmmm. I wonder if that difference in their relationship is the source of the flirtation Betty turns on with the mechanic; it was fraught with sexual tension, feminine wiles, and something unspoken in the "deal" she struck with the mechanic, far more than just being a "damsel in distress."

As for Don, he's clearly feeling emasculated by his new role as perfect husband and father, unable to perform sexually, under attack by increasingly younger men at the office, and feeling increasingly sentimental. But the real mystery is to whom he sends that book of poetry. An estranged former lover (Rachel)? An old flame (Midge)? Or someone wholly new? Someone like... Peggy Olsen? Wouldn't it be just fitting if the good ol' boys were right about something and there was something going on between Don and Peggy after all?

I might be completely off base with that conjecture but, in any event, I'm intrigued by the identity of Don's new mystery woman and completely hooked once again by Mad Men's delicious charms.

Next week on Mad Men ("Flight 1"), Paul throws a party at his apartment and introduces the Sterling Cooper set to someone significant in his life; the agency pursues an airline account using a very unorthodox approach, despite a conflict of interest.

Season Two continues tonight with a brand-new episode ("Tapped Out"), Courtney's husband starts sniffing around the job site, leading to some conflict between Jeff and Ryan; Jenni inadvertently sends the wrong list to Carrie.

Danielle C.F. Maris said…
So happy that Mad Men is back! And I think you're absolutely right about the "little moments" truly defining the characters in this show.

Supposedly, this season is going to focus more on the characters' lives outside of the office and at home and I'm excited to see where that will lead and what will be revealed!
7/29/2008

Anonymous said…
Nice piece on the season opener.
This is so much like the Sopranos in that once a week just isn't enough. I find myself having to go to the internet to read reviews, blogs, etc. to get a bit more out of each episode.

Maybe you didn't want to state the obvious, but I don't think Betty's flirtation with the mechanic had anything to do with her changing relationship with Don. It seemed to have everything to do with her encounter with her old roommate, the model turned call girl. You could tell by Betty's conversation with her neighbor that she was fascinated with this lifestyle. She obviously got a thrill from being able to cash in on her feminine charm.
By the way, no way the mystery poetry book recipient is Peggy Olsen. Don may be a smart guy but in some ways he's clearly as superficial as his wife. He would never consider Peggy to be attractive or pretty enough to be in his league.
8/02/2008