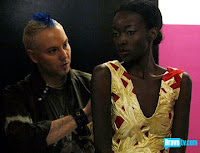 Okay, here's the deal: just a few quick words about last night's episode of Project Runway ("Grass is Always Greener") because then I literally have to dash out the door to start the drive down to San Diego for Comic-Con. (If you never thought you'd see the words Project Runway and Comic-Con in the same sentence, it's a day of miracles.)

This week, the designers had a pretty tough challenge, designing a cocktail dress using only "green" fabrics, considering the narrow timeframe involved and a Project Runway first that had the designers' models actually buying the fabrics and trims. While these ladies might look lovely, they didn't seem to know the first thing about fashion, many of them picking out fabrics that wouldn't really work as a cocktail dress; no less than three of them picked the same awful brown satin that gave me the heebee-jeebees just looking at it. Ick.

Some designers are already starting to irritate me to the point that I wish there would be a mass auf'ing in the works. Blayne's loathsome ability to add "licious" to every single noun or adjective in the English lexicon is absolutely killing me; I think he used it at least three times last night (including the Atlas New York apartment chalkboard's "team licious") and I wanted to hurl my television set through a window each and every time. Suede calls himself Suede, which would be bad enough but has to turn up the annoying factor to eleven by constantly referring to himself in the third person, which is a HUGE pet peeve of mine. And Stella seems locked into one particular thought pattern ("leather") and doesn't really want to budge from her design aesthetic. Doesn't she remember how hard the designers came down on Rami for his constant draping?

But onto the clothes. Despite his third-person tendancies, I thought that Suede did an amazing job with his design, transforming hard-to-use satin into strips of fabric from which he constructed a gorgeous bodice of overlapping cream and red and paired it with a tutu skirt, creating a dress that could have gone in one of two ways: a gorgeous, understatedly elegant and eye-catching creation... or a hot mess. Fortunately, it went towards the former and was a startling showcase for his creativity and vision. Well done, Suede. I had a feeling he would be the one getting his design sold on Bluefly.com, even if immunity wasn't up for grabs this week.

The designer to beat, however, really has to be "1940's broad" Kenley, who sent an absolutely amazing design down the runway this week; it was a stunning knee-length cocktail dress in a flawless cream satin, with a high, hand-sewn collar and a thin, black beaded belt. The effect was one of elegance and simplicity and her model Shannone wore it beautifully. I've got my eye on Kenley now.

I do have to say that I was impressed with the design that Stella ended up pulling together in the end. I did assume that she would pull off another black trash bags fiasco again this week but I was pleasantly surprised with her creation, an assymetrical, barely-there off-the-shoulder dress that featured one long sleeve and some biker-chic stitching along the sides. Considering she was working with a cream/champagne satin, the effect was startling, especially as her model Kendall really wanted something beachy: billowing, loose, and dripping with extra fabric. Instead, Stella injected her own design aesthetic into the mix and pulled off a gorgeous dress. Hmmm.

As for those landing at the bottom, there was a lot not to love about this week's designs. I thought Korto had an interesting idea with the outside darts but it didn't quite work in the execution and the model really did look as though she had fins coming out of her posterior. Not the right look for a cocktail dress and it didn't show off Korto's construction abilities at all. Leanne's schizophrenic brown satin sack dress with pockets and matching Peter Pan cap really did look like five dresses squeezed into one design: far too many ideas and not enough editing going on here. The result was messy and overwrought. Poor Wesley's design was a train wreck; stuck with not enough fabric (though he did have that awful seafoam green as well), he created a brown satin dress that was too tight, too short, and too shiny. It looked cheap and badly constructed, as though--according to Michael Kors--twenty sets of hands had worked on making it.

I really did think that it would be Leanne who would be the one sent home, up until the very last second. I really like her quirkiness quite a lot (and find her to be a slightly more endearing Sofia Coppola for some reason) but I thought that Wesley, while VERY young, showed some real potential to create some lasting American sportswear. But c'est la vie, I suppose. Heidi pulled a bait-and-switch and auf'd Young Wesley right then and there. Which is sad because there were several designers who overall have a lot less talent than Wesley or Leanne and who should have been up there based on their previous week's designs. But that's not how Project Runway works: you're only as good as your last design and Wesley's was definitely the worst of the worst.

Next week on Project Runway ("Bright Lights/Big City"), tempers flare during a rain-soaked challenge, the designers must find inspiration in the Manhattan sunset and use the colors of the city to create their designs; Sandra Bernhard drops by to be this week's guest judge.

Okay, I know, I know, but I find her acerbic overeagerness somehow calming. On tonight's episode ("Busted in Bora Bora"), Kathy heads to Bora Bora for a stand-up show and greats some fans; back in LA, she tries to get her mother to move out of chez Griffin and into a retirement home.

Anonymous said…
I agree, re: Kenley. I really like her. I've had my eye on her since last week, but that was mostly due to her personal style, which I love. This week she showed her design style and it was gorgeous. I knew Suede would win, and he deserved it (Ally says grudgingly).

I, too, was bummed that it came down to Wesley and Leanne. I pegged Wesley almost from the second he started talking about satin being unforgiving, but still a shame.
7/24/2008

Danielle C.F. Maris said…
Wesley's design certainly was the worst this week but I still think he's more talented than some of the designers that are still there. Too bad but he's very young and will have many more opportunities, I'm sure. And I thought it was pretty cool how humble he was about getting auf'd so early in the game.
7/24/2008