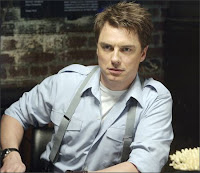 Will Captain Jack Harkness hang up his trademark trench coat and suspenders for a certain star-spangled shield?

The rumor mills are all abuzz that Torchwood's leading man John Barrowman seems to be in the running to play iconic comic book hero Captain America in an upcoming Hollywood feature film scheduled to be released in 2011.

At the Torchwood panel at Comic-Con, Barrowman--between bursting into song with Torchwood co-star Naoko Mori (poor, departed Tosh!) for a duet of "Sun and Moon" from Miss Saigon (the two starred in a stage production of the musical a LONG time ago) and offering some sexual innuendo-laced dialogue about his, er, "boys" and the physical dimensions of one of cast mate Gareth David-Lloyd's body parts--teased the audience about the possibility that he might be up for the role of Steve Rogers when questioned by a fan if he would be up for "rocking the blonde hair" of Marvel superhero Captain America.

"I would love to play Captain America," said Barrowman, who later admitted that there had been discussions with his agents about him playing the role.

So will Barrowman take up the Captain's famous shield? Torchwood producer Julie Gardner said she would "intercept that email" in order to hold onto her series' lead.

Season Three of Torchwood, comprised of five one-hour episodes, is set to launch next year on BBC America.

Danielle C.F. Maris said…
"...the two starred in a stage production of the musical a LONG time ago..." So random!

Can definitely picture Barrowman in the Captain America role. It's quite similar to his Captain Jack role except with more patriotism and less, you know, sex.
7/25/2008

Anonymous said…
I'm going to miss Tosh on the show! It would have been fun to have seen her and Captain Jack together one last time. Especially singing!
7/25/2008