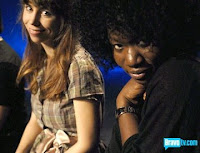 If there are two things that you can always depend on with Bravo's Project Runway, it's that there's bound to be drama (and tears) and that eventually there will be a challenge that is much more about product placement than actually tasking with designers with creating breathtaking work. Last season has it's Hershey's candy-inspired challenge; this season has the Saturn.

Yes, I know that product integration (or to quote the esteemed Jack Donaghy, "product intergortion") is here to stay and a vital part of bringing advertisers' messages to the audience in the age of fast-forward-capable TiVos and generic DVRs, but I hate when it's so blatantly obvious as it was during last night's episode of Project Runway ("Fashion That Drives You"). (For another example of OTT product integration, check out Vitamin Water's presence in the first three episodes of next season's Gossip Girl.)

In any event, there were a few designers who did rise to the challenge of creating a fashion-forward design out of materials to make a Saturn, while many of them missed the point entirely. It surely wasn't a surprise to anyone that both Stella and Keith would end up in the bottom two, likely joined by also-ran Blayne, whose continued presence in this competition is mind-boggling to me. Hell, I'd go so far as to use Suede's mot du jour and call it "wackadoodle."

I was super-impressed, however, with the amazing garment that Leanne pulled off. It was a unique silhouette, beautifully constructed, and flawlessly executed. I am glad that she filled her model Karalyn's knickers with muslin in order to give curves of the dress the volume necessary to pull off the look and fraying the bits of seatbelt to create a feminine border on the bodice was as unexpected as it was stunning. Leanne won this challenge hands down and it was about time that she stepped up and showed the judges what she is capable of. I don't like Rachel Zoe as far as I can throw her, but here she was right: Leanne's garment looked Paris catwalk-ready.

Once again, Korto offered up a stunning design, weaving the gold-colored seatbeats into a coat-dress that was elegant, fashionable, and did not for a split second look like it was made out of recycled seatbelts. Simply gorgeous, this was killer work.

And I thought that Jerell pulled off an extremely modern (almost futuristic) design with his bustier and skirt combo that showed some real vision, skill, and risk. The overall look was definitely enhanced by the makeup and hair styling of his model Nicole, which gave the entire design a glam dystopian feel. (Yes, I know that's a bit of an oxymoron, but live with it.)

Landing in the bottom was Blayne, of course, with his ill-fitting fringed Cinderella dress with glued-on pieces of glass. (Ick.) He was joined by Stella, whose vest and skirt combo seemed to confuse the judges, who said it looked disjointed. It did look disjoined, but it also looked poorly made to me, something that the judges didn't even bring up during critique, and showed a distinct lack of inspiration. For a challenge that had leatha on hand in the fistfuls, I am not sure why Stella didn't go her normal route and craft an edgy biker look.... even though the judges have said that they wanted innovation this time around. But Stella's garment wasn't at all innovative, so she might have been better off sticking to what she does best.

And then there was Keith, who seemed to transform into the consummate drama queen this week, shouting and picking fights with his model and cursing up a storm. Wow. I knew he'd be the one to the get the boot, especially once he told Michael Kors that his comment last week wasn't constructive and just spiteful. (Um, that's what critics do, Keith: they criticize.) Michael Kors was right; if you want to make it in the fashion industry, you have to be able to let those comments roll off your back. But Keith was stuck harping on the judges' dislike of his last design to focus on the task at hand and ended up turning in a garment that was falling apart (yes, the model DID sit down during hair and makeup) and looked so super-safe that it missed the entire point of the challenge, which was to be innovative and original. It was, instead, hopelessly boring and dull: a white tank top and a high-waisted belted skirt. Meh.

No surprise then that Keith would be the one to get auf'd in a storm of tears and recriminations.

Next week on Project Runway ("Double 0 Fashion"), the designers are given a challenge to create looks that are inspired by one of the fashion icons of the last decade... looks that are then to be judged by fashion visionary Diane von Furstenberg. And, yes, the contestants are shaking in their designer boots.

Anonymous said…
I didn't care for JErrell's too-short outfit. My favorite outfit by far (And the favorite of the friends I watch with) was Terri's, and she wasn't even in the top 3. I thought her pants fit the model as if she was born with them on, and I loved the intricacy of her top.

Unknown said…
Suede really needs to go. This is the second episode in a row where he has brought up a dead relative in an interview, choked up and blown air kisses to the sky. It's so calculated and insincere that I want to vomit.
8/28/2008

Anonymous said…
Suede can blow air kisses up his you-know-what. They have become more annoying than Blayne's "licious" obsession.
8/28/2008

Anonymous said…
Loved, loved, loved Leanne's design. Korto's jacket was beautiful too. I thought that the pants Terri made were incredible but I wasn't that impressed with the top.

I thought this was going to be a lame challenge (like the Hershey's one) but the designers created some really impressive garments and managed to make the challenge about them and their vision and not just an ad for Saturn.
8/28/2008