Quarters, Ugly Portraits, and a Bad Baby: The "Flipping Out" Reunion Special 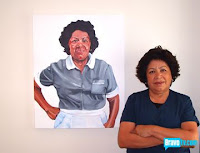 Did anyone else watch last night's reunion special for Bravo's deliciously addictive reality series Flipping Out?

While not a hell of a lot was revealed that we didn't already know about Flipping Out's quirky cast, it was great to catch up with Jeff, Jenni, Ryan, and Zoila, even if we had to sit through annoying host Andy Cohen's inane chatter for an hour. Yes, I get that he's one of the executive producers on the series (and a VP at Bravo, to boot), but it doesn't make it any easier to sit through his uncomfortable interviews and endless mugging for the camera. And that's not to say anything about Andy nearly falling out of his chair. Sigh.

I was surprised that the reunion special really did downplay Chris Elwood's firing and the NannyCam incident; I half-thought that the producers would trot out Chris for the cameras and make him say a few things about the surveillance incident and the dissolution of his marriage, but I am glad, for Jenni's sake anyway, that it didn't play out this way. That said, I do wish that Chris Keslar would have been there, as I find him absolutely hilarious. Sure, he doesn't work for Jeff anymore but that hasn't stopped him from chiming in throughout the entire sophomore season of the series with astute and sarcastic commentary.

I really do just adore Zoila (the scene with her telling Jeff that she "had an accident" with one of his Lacoste--not Izod, Andy--shirts was priceless, as was Jeff pouring her a large glass of red wine after she couldn't reach the cocktail shaker) and I loved her discussing what she had learned from working at Jeff Lewis' office: Tila Tequila, Daisy Dukes, and how to avoid a hangover after drinking copiously.

Huzzah! Ryan's hair was finally fixed and he does appear to have realized that his "man bangs" were a complete and utter disaster. Seriously, people, I do hope that if I ever make as big of a hairstyle snafu as Ryan did that someone out there will tell me to my face and force me to fix it post-haste. Because, wow, that was one awful hairstyle on Ryan. Ouch.

Jenni was as articulate as I thought she would be, even after everything she's been through over the course of the second season of Flipping Out. Whether she's talking about the breakdown of her marriage (she did admit that Chris had asked for divorce four years ago, as Jeff had indicated), how much of a "catch" Jeff is, or offering Zoila a new uniform, Ms. Pulos is polished, poised, and perhaps the most well-spoken reality series participant.

And I am amazed that Jett is still working for Jeff and happy about the job. Could Jeff Lewis' office have finally found the ideal house assistant they've been looking for all along? Stranger things have happened...

All in all, it made me hungry for the next season of Flipping Out and I can only hope that Bravo gives fans what they want and renews the reality series for a third season of tear-downs, tear-ups, and the wackiest bunch of people ever to work in an office together.

Season Five (the final season on Bravo) of Project Runway continues tonight. On tonight's episode ("Welcome to the Jungle"), it's time for more cross-promotional opportunities as Brooke Shields, star of NBC's femme-centric drama Lipstick Jungle, drops by for a challenge in which the designers must create outfits for working women.

The extra scenes they showed with Jeff and Zoila were hilarious. I could spend hours just watching the two of them go back and forth. My new favorite quote is:

"That sounds like a YOU problem not a ME problem."