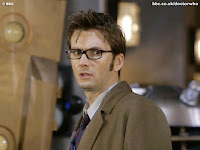 Good morning and welcome to your Monday television briefing.

Steven Moffat, who has taken over the reins at Doctor Who from Russell T. Davies, has said that he wouldn't rule out a feature film spin-off of Doctor Who so long as it didn't interfere with production on the series itself. "It would be good to see it in the cinema so long as it was great and fantastic," said Moffat, speaking at the Edinburgh International Television Festival. "But a film is on [for] 90 minutes and that is not as important as the series. But so long as it doesn't get in the way of the show we could do it. If it got in the way of the show that would be appalling." The series itself has already had two feature spin-offs in the 1960s: Doctor Who and the Daleks and Daleks: Invasion Earth 2150 AD, both of which starred Peter Cushing as the Doctor. (The Guardian's Organ Grinder)

There's a fantastic interview with J.J. Abrams about his new FOX drama Fringe and about the differences in telling stories with self-contained episodic storylines like Fringe and the Byzantine plots of series like Lost and Alias. "I just got tired of hearing people say to me, over and over, ‘Yeah, I was watching it, but I missed one, I got really confused, and I stopped watching it,’” Abrams said in a recent phone interview. He goes on to discuss just went wrong with Alias. And no it wasn't the giant orange floating ball that was supposedly Rambaldi's endgame. (New York Times)

Meanwhile, the Los Angeles Times has interviewed Shawn Ryan about the end of The Shield, which kicks off its seventh and final season next month. Ryan, of course, was on the picket line when the series finale of the series he created (which launched FX as a destination for quality drama) was shot, as was the pilot for the doomed FOX supernatural series The Oaks (which never made it to air), which Ryan was on board to produce. He talks about his decision to view pencils down as a refusal to perform editing duties as well as writing services, the end of The Shield, and the strike itself. (Los Angeles Times)

If that weren't enough interviews for you, here's one with The Office's Rainn Wilson about his role in the feature film The Rocker and, of course, Dwight Schrute. (New York Daily News)

James Cromwell (24) has been cast in NBC's new drama series My Own Worst Enemy, where he'll be playing the enigmatic head of a covert government agency that is tinkering with Christian Slater's dual-identity husband/superspy Henry/Edward. Does he play the head of Janus (i.e., Mavis' mysterious employer)? Only time will tell. Cromwell joins a cast that includes Christian Slater, Madchen Amick (herself turning up in several episodes of Gossip Girl next season), Saffron Burrows, Mike O'Malley, and Alfre Woodard. (Entertainment Weekly's Ausiello Files)

FOX will be streaming the series opener of Fringe and the season premiere of Terminator: The Sarah Connor Chronicles online... if you're a college student, that is. Users who log onto Fox.com from college-based .edu domains will be able to watch a simul-stream of the opener of Fringe and Sarah Connor at the same time as they launch on-air, as well as behind-the-scenes footage, cast interviews, and music videos. It's a novel concept, but why wouldn't students just, er, watch the episodes on the linear channel? (Variety)

In other fall launch news, FOX and CBS will respectively not air the original pilots for comedy Do Not Disturb and drama Eleventh Hour until later in the season. Instead, the networks will air subsequent episodes when they launch Do Not Disturb on September 10th and Eleventh Hour on October 9th. Having already seen both of these pilot episodes, I can honestly say that the networks are making the right decision as both were just awful. (Futon Critic)

Lifetime has given a six-episode order to reality competition series Blush: The Search for America's Greatest Makeup Artist, to launch in November as a potential companion for its poached Project Runway. Series, produced by IMG, will follow eight makeup artists as they live together in LA and compete for a one-year contract with Max Factor, $1,000 in cash, and the opportunity to style a magazine cover shoot. (Variety)

Paris Barclay (ER) has been promoted to executive producer on HBO's In Treatment; he'll direct at least ten episodes of the therapy drama next season. (Hollywood Reporter)

Looking to relive the freshman season of the teen soap? On tonight's first season finale ("Much 'I Do' About Nothing"), Blair comes to Serena's defense and faces off with Georgina Sparks (Michelle Trachtenberg); Lily prepares for her wedding but can't stop thinking about Rufus; and Serena finally tells Dan what's really going on with her.

This week on No Reservations, Tony travels to Egypt, one of the oldest civilizations on Earth and spends some time with locals in order to get an understanding for what it means to be Egyptian.

On this week's episode of Weeds ("Head Cheese"), Nancy deals with the aftermath of Shane's exploits and another confrontation with Guillermo; Celia tries to find a new rehab facility; Doug and Maria's relationship hits the skids and they turn to Andy for help; Silas' new business is growing too fast.

Danielle C.F. Maris said…
A Doctor Who movie would be great!...As long as it didn't interfere with the series (as Moffat said). But I think it's the type of show that could definitely work as a feature. And it would be fantastic to see the Doctor on the big screen!
8/25/2008

Anonymous said…
I think it's sad that people don't seem to have the patience for intricate storylines, like those in Lost. With Tivo and all of the other recording devices out there, there's no reason to miss an episode (or, if you do, you can usually watch it online). And I feel that if you invest in a show like Lost you are truly rewarded. The storylines may be more complicated than, say, CSI but it's their layers and complications which make them that much more satisfying. I am excited about Fringe but don't want it to be dumbed down!
8/25/2008