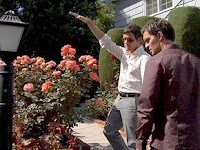 The more things change, the more they stay the same.

It's yet another good day at Jeff Lewis' office, as seen in last night's season finale of Flipping Out ("Back in the Market"). Sure, there's the remains of, er, human feces to be dealt with at yet another job site, a surly moving contractor to be yelled at, and delays with completing the Encino property before Jeff's clients can move in, but that's just par for the course as far as I am concerned.

I thought it was about time that Jeff started to interview for someone to come in as a new house assistant (especially after the incident at Valley Oak) to replace Chris Keslar, but I never imagined that it would be someone quite so terrifying as ClownHead... I mean, Jett. Everyone is oohing and ahhing over how "attractive" Jett is but his hair was actually quite scary to me; the mane equivalent of a trainwreck you can't quite look away from. (Shudder.)

Jett seems nice enough, if already in way over his head, and despite saying that he's laid-back and will do anything, didn't REALLY seem to want the job, if you know what I mean. The look of abject terror on his face said more than his noncommittal attitude towards accepting the position. Something tells me that Jett won't be sticking around for very long, though I did love Jenni and Ryan's interview questions (do you mind being made fun of? if you are right, can you still admit that you are wrong? do you mind being verbally abused?), which cut right to the heart of the matter.

On a different subject, what was up with mover Mario? Jeff has used him for years and has recommended him to many a contact, so why was he being so uppity and rude to Jeff while moving the furniture to the Encino property? I just didn't get it at all or where the attitude was coming from, especially as the Lazners had paid Jeff to arrange the furniture and he was instructing the crew where to place the individual pieces. Strange.

The game of quarters was absolutely hysterical and it was lovely to see Jenni seem relaxed and confident again, especially after all of the stress of her marital situation with Chris Elwood, her job site injury, and friction with Mr. Lewis. And it wouldn't be Flipping Out without one final argument between her and Jeff about a mistake made. Yes, Jeff has come a long way in his battle with his anger management issues but would it kill him to at least praise Jenni when she does do a good job every now and then?

I knew that this season would end with Jeff once again homeless, following the sale of Commonwealth, and would have to relocate somewhere while he figured out where his next semi-permanent base of operations would be... but I never thought he would ask ex-boyfriend Ryan to allow him, his housekeeper, and his five animals to move in with him and Dale. And sure enough, Ryan wasn't having any of it (I don't blame him), but instead convinced Jeff to spend some time in Malibu for the summer.

I actually do hope that Jeff does find some semblance of balance whilst living on the water in Malibu and that the series does return to focus on Jeff, Ryan, Zoila, and Jenni working the lucrative Malibu real estate market. (Just as long as there are no crossovers with those creepy kids from Million Dollar Listing.)

I'm keeping my fingers crossed that Bravo opts to renew this hilarious and gripping series for a third year, as there are few docusoaps that manage to suck me in quite like Flipping Out does week after week. And if last night's season finale wasn't enough Flipping Out for you, come back next Tuesday night at a slightly earlier time for the Flipping Out reunion special...

Next week on Flipping Out, it's the Flipping Out Reunion as Jeff, Jenni, Zoila, Chris Keslar and others gather to take a look back at the sophomore season's good times and bad times and those truly awful times, like the firing of Chris Elwood. What really happened there? Find out next week.

Danielle C.F. Maris said…
I think that Jett is the lovechild of Fabio and Carrot Top. Get a haircut, dude! I don't see him lasting long in the Jeff Lewis world.

Ms. Val said…
Yes, Jeff has come a long way in his battle with his anger management issues but would it kill him to at least praise Jenni when she does do a good job every now and then?