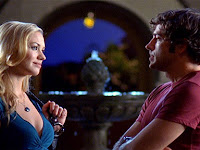 Good morning and welcome to your Wednesday morning television briefing. Thanks to all for the birthday wishes both via email and Facebook (I had a wonderful birthday dinner at Comme Ca and saw Ali Larter and Amy Smart); it was definitely a birthday to remember.

NBC has gone ahead and ordered the back nine episodes of action-comedy series Chuck a month before the start of its sophomore season. As all Chuck fans know, the first season of the genre-busting series was cut short by the writers strike last season and the Peacock only aired 13 episodes. Series co-creator Josh Schwartz called the news "unexpected" and went to say, "It's an incredible show of faith by NBC and so amazingly nice to get based on the work alone." I couldn't have put it better myself and am pleased as punch that Chuck will get to air 22 episodes this year. Happy days! Chuck returns to the airwaves September 29th. (Variety)

The Peacock also ordered a fourth season of reality competition series America's Got Talent, to air next summer. (Hollywood Reporter)

Entertainment Weekly has interviewed 90210's Shannen Doherty and Jennie Garth... together. They chat about reuniting, why the new 90210 is so shocking ("Aaron Spelling is rolling over in his grave right now," says Garth), and more. You know you want to read it. (Entertainment Weekly)

Top Chef's Wolfboy (a.k.a. Marcel Vigneron) was arrested on suspicion of DUI. (The OC Register)

ABC has handed out a put pilot commitment to an untitled comedy series from creators/executive producers Steven Levitan and Christopher Lloyd; the duo last collaborated on last season's FOX comedy Back to You, which was canceled after a single season. Their new comedy will be a single-camera affair about three families--a married couple with three children, an older man with his much-younger wife and adopted son, and a gay couple who have adopted an Asian baby--seen through the eyes of a Dutch filmmaker, who has returned to the US many years after he was an exchange student living with one of the aforementioned characters. (Variety)

FOX will preview Japanese game show format Hole in the Wall, from Fremantle North America, on Sunday, September 7th and Tuesday, September 9th, ahead of its official launch. (Futon Critic)

CSI creator Anthony Zuiker has signed a deal with Dutton to create three suspense-thriller "digital novels," which will include filmed elements and a social networking component. Readers will be given codes to access a website that will offer two-minute filmed scenes filling in the blanks between five-chapter chunks of the "novel." (Variety)

The New York Times takes a look at the current crop of teen dramas, from ABC Family's The Secret Life of the American Teenager and CW's Gossip Girl to BBC America/Channel 4's Skins. "If you are past the point of lying to your parents about going out for a whiskey sour," opines the Times' Gina Bellafante, “Secret Life’s success is likely to seem puzzling." Oh, Gina, you bet it does. (The New York Times)

ABC Studios has promoted Gary French and Paula Warner to co-heads of production, filling the post left empty after Barry Jossen moved over to the network to run creative. They will report to Mark Pedowitz. (Hollywood Reporter)

Yes, it's a complete and utter retread of Ramsay's Kitchen Nightmares with salons subbing in for restaurants, but there's absolutely nothing else on tonight to watch, so here goes. On this week's episode ("De Cielo Salon: Burbank, CA"), Tabatha Coffey tries to save another struggling hair salon but tangles with the salon's boss and unhygienic conditions.

Danielle C.F. Maris said…
"new comedy about three families--a married couple with three children, an older man with his much-younger wife and adopted son, and a gay couple who have adopted an Asian baby--seen through the eyes of a Dutch filmmaker, who has returned to the US many years after he was an exchange student..."

Usually I complain about concepts being too simple and unoriginal but this is really just...well, I don't know what.
8/28/2008