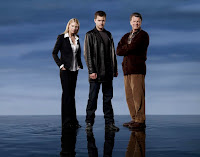 Fringe stars Anna Torv, Joshua Jackson, and John Noble tease some details about the second season of the FOX sci-fi drama, which launches next week, during a video interview on the set of an Entertainment Weekly photo shoot for the magazine's Fall TV Issue (on newsstands today). (Entertainment Weekly)

NBC has announced that Maura Tierney (ER) has left the cast of Parenthood in order to undergo treatment for breast cancer. The series, from executive producer Jason Katims, was originally slated to launch this fall on the Peacock but the network delayed the series until midseason in order to allow Tierney to begin treatment. Unfortunately, that treatment will continue to interfere with the series' production schedule. Tierney and Parenthood have agreed to go their separate ways and Tierney's role, that of harried single mother Sarah Braverman, will now be recast. (E! Online's Watch with Kristin)

ABC has acquired six episodes of Secret Millionaire, the FOX reality series that wasn't picked up for a second season. Series, from RDF USA, will return to production later this year and will launch on ABC in midseason. (Variety)

CBS is said to be close to reaching a deal with Craig Ferguson and Worldwide Pants that will keep the Scottish host on board The Late Late Show through the 2011-12 season. (Variety)

BBC One has commissioned The Wizard of Oz, the latest in its line of star formats such as How Do You Solve A Problem Like Maria?, I'd Do Anything, and Any Dream Will Do. Project, from Talkback Thames, will search for an actress to play Dorothy and a canine actor to play Toto in an upcoming Andrew Lloyd Webber musical production of Oz in London's West End. Judges have yet to be announced for the series, slated to launch in 2010, but Graham Norton will return as host. (Broadcast)

IFC has ordered six half-hour episodes of reality series Dinner with the Band, in which chef Sam Mason will cook a meal for some of the music industry's top indie bands, who will perform and chat over dinner. Series, which is set to debut on November 24th, has already lined up Les Savy Fav, Kid Sister and Flosstradamus Men, Final Fantasy, Yacht, and Sharon Jones &the Dap-Kings. (Variety)

William Hurt (Damages) and Ethan Hawke (XXXX) have joined the cast for an international co-production adaptation of Herman Melville's 1851 novel "Moby Dick." Hurt will play megalomaniac captain Ahab while Hawke will play the ship's first officer, Starbuck. Budget for the Tele Munchen production, a joint venture between Germany's RTL, Austria's ORF, and RHI Entertainment, is said to be in the range of $25 million. Script was written by Nigel Williams and will be directed by Mike Barker. (Hollywood Reporter)

Brian Austen Green (Terminator: The Sarah Connor Chronicles) and Graham Greene (Twilight Saga: New Moon) will topline Hallmark Channel period telepic The Wild Girl, about a would-be photojournalist in the 1930s (Green) who joins up with some Americans en route to Mexico to rescue a kidnapped boy. Project, written by Ronald Parker (Broken Trail), will be directed by Don McBrearty. (Variety)

Howard Moon said…
I'm very intrigued by the Moby Dick adaptation. Could be brilliant...or a disaster...but I can definitely see William Hurt in that role.
9/11/2009