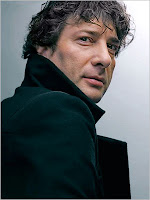 Author and screenwriter Neil Gaiman ("The Graveyard Book") has been plagued for years by rumors about the long-running British sci-fi series Doctor Who.

Appearing [Thursday] night to give a live reading and participate in a question-and-answer session at Royce Hall (as part of UCLA Live's spoken word series), Gaiman was once more put on the spot and asked if he would ever write a Doctor Who script.

While not exactly a confirmation, it's perhaps the most concrete answer those of us in attendance could have hoped for. Season Five of Doctor Who is set to air on BBC One and BBC America this spring and it's highly unlikely that Gaiman will contribute a script for the first season of newly installed Eleventh Doctor Matt Smith's run.

Whether that means that Gaiman will "ever" write a Doctor Who script remains to be seen but for those of us who would love to see the "Sandman" and "American Gods" author tackle The Doctor, it's at least something to hold on to.

UPDATE (2/6/10): After I posted the above yesterday, Gaiman himself confirmed the news at SFX Weekender, announcing that he would be writing a script for Season Six of Doctor Who. Gaiman's episode, currently entitled "The House of Nothing," will air in 2011. You heard it here first!

Heatherette said…
That would be incredible! At least it sounds like he's up for it, should they ask. Fingers crossed!
2/05/2010

There were some pretty strong rumours that Gaiman was working on something for this series and Moffat did say that Simon Nye stepped in when a script fell through. So it's entirely possible that Gaiman has a script in progress that will be included in 2011's series.
2/05/2010

Matthew McIntyre said…
Gaiman has just confirmed that he'll be writing a script for next year's series at the SFX Weekender. He refers to it as "giving them a scoop" here:

Matthew McIntyre said…
Another more specific tweet from SFX themselves:

Thomas said…
Awesome! This year Richard Curtis, next year Neil Gaiman, Steven Moffat already managed to get two of my dream Doctor Who writers on the show in his first two years! Also, Steven himself has written 6 of this years episodes? That's absolutely brilliant! Sooooo looking forward to it now!
2/07/2010