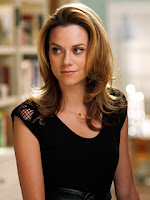 Fancast's Matt Mitovich is reporting that former One Tree Hill star Hilarie Burton has signed on to appear in a six-episode story arc on Season Two of USA's White Collar, where she'll play Sarah Ellis, a new love interest for Matthew Bomer's Neal Caffrey, who is described as "an insurance investigator-slash-white collar bounty hunter who has a bit of a score to settle with Neal." Bomer's Neal will quickly find himself enmeshed in a game of cat and mouse with Sarah. Season Two of White Collar is set to launch Tuesday, July 13th at 9 pm ET/PT. (Fancast)

Former Eli Stone star Natasha Henstridge is heading back to the courtroom, according to Entertainment Weekly's Michael Ausiello, who reports that Henstridge has signed on to a multiple-episode story arc on Season Two of Lifetime's legal dramedy Drop Dead Diva, which returns June 6th. She'll play the "heretofore-unseen partner at Harrison & Parker," according to Ausiello. (Entertainment Weekly's Ausiello Files)

E! Online's Megan Masters talks to The Big Bang Theory's Jim Parsons about the CBS comedy's move to Thursdays next season and Sheldon's new love interest, played by Mayim Bialik. "I am optimistically excited about it," said Parsons about Big Bang Theory's new scheduling. "We all know the world of television is unpredictable...but I do feel hopeful about it. It will be very exciting to be a part of a new night of comedy, a new section of comedy, whatever it turns into. My initial reaction was slight disbelief because I didn't see it coming, but as the day wore on I felt like this could be good. It will certainly keep things exciting and interesting. CBS has always been with us. From really very early on they've done these moves like this that made you realize that they have a lot of faith in the show." (E! Online's Watch with Kristin)

SPOILER! (If you haven't seen last night's 24 series finale) Entertainment Weekly's Lynette Rice has an interview with 24 executive producer Howard Gordon about the series finale, which aired last night. "Yes, that was very much designed from the beginning," said Gordon when asked if he knew early on that the season would end with Jack going off the rails. "How it would end, however, was something that was really unknown. I saw a little bit further ahead than I generally do, and we wanted to knit Jack and Renee together, only to take them apart, and for that to have a really profound effect on Jack. That’s about as far as we knew in the broad strokes. How that was going to happen, and how it would impact Allison Taylor and Chloe — those were late-to-the-party additions that I think helped bolster that initial idea." (Entertainment Weekly's Hollywood Insider)

E! Online's Kristin Dos Santos has the skinny on the fake spoiler that Lost showrunners Damon Lindelof and Carlton Cuse attempted to put out into the ether, one that the series ending with a wedding between Sun (Yunjin Kim) and Jin (Daniel Dae Kim). "But this wedding, unlike the Kwons' first one (with special guest Jacob), was actually a red herring planted by producers to throw off any spoiler hounds trying to sniff around finale storylines," writes Dos Santos. "According to reliable sources close to the show, a fake call sheet was sent out to the entire cast and extended crew detailing a Jin and Sun wedding scene for the finale. The 'spoiler' never leaked." (E! Online's Watch with Kristin)

Deadline's Nellie Andreeva is reporting that ABC has put five drama scripts into development for spring, hoping land two pilot orders from the pack of new projects. These include the Sony Pictures Television-produced reboot of Charlie's Angels, from Alfred Gough and Miles Millar, and Javier Grillo-Marxuach's Department Zero, and three projects from ABC Studios: Ghostworld, from Ian Sanders and Kim Moses (Ghost Whisperer), Behind the Blue, from executive producer Taye Diggs, and medical drama Island of Women, from Matthew Gross. These are on top of the six more scripts ordered for Rand Ravich's quirky bounty hunter drama Edgar Floats. (Deadline)

E! Online's Kristin Dos Santos talks to Gossip Girl's Chace Crawford about the fact that Crawford's Nate Archibald desperately needs a new love interest on the CW drama series... and that it likely won't be Taylor Momsen's Jenny. "I always thought [Nate and Jenny] was a little weird," Crawford admitted. "There's the age gap, she's still in high school..." Meanwhile, Crawford indicated to Dos Santos that the shocking season finale might point to a darker Nate next season. "That may be where they're going," Crawford said. "It'd be fun to play. Who knows, maybe I'll be the one getting shot next year." (E! Online's Watch with Kristin)

SPOILER! Elsewhere, Entertainment Weekly's Michael Ausiello is reporting that Gossip Girl producers are casting the role of Eva, described as " an utterly gorgeous female in her 20s or 30s who boasts a warm heart and an authentic French accent." Eva will be the new love interest for Chuck, natch, as shooting gets underway in New York and Paris in July. (Entertainment Weekly's Ausiello Files)

Jace Alexander (Burn Notice) will direct the Syfy action-adventure drama pilot Three Inches, which is said to focus on "an underachiever who develops a unique 'super' power after being struck by lightning — the ability to move any object by 3 inches using his mind – and is soon recruited by a covert team of superheroes." (Deadline)

Meanwhile, Nellie Andreeva also reports that Ken Sanzel (NUMB3RS) is in the process of closing a deal to come aboard new CBS drama series Blue Bloods as showrunner. (Deadline)

Piper said…
Neal Caffrey definitely needs a new love interest. His infatuation with Kate was the least interesting thing about the show. (I really wasn't crazy about the actress playing Kate.) I did really like Alex, though, and hope that she pops up again.
5/25/2010