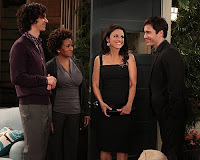 A day ahead of its official upfront presentation, CBS announced that it had canceled seven series, including The New Adventures of Old Christine, Ghost Whisperer, Cold Case, Miami Medical, NUMB3RS, Gary Unmarried and Accidentally on Purpose and had issued reprieves for Medium and Rules of Engagement.

It's still possible that the Warner Bros. Television-produced Old Christine could turn up on ABC as Steve McPherson has previously indicated his desire to acquire the Julia Louis-Dreyfus-led comedy should CBS opt not to renew it... and the same fate could hold true for supernatural drama Ghost Whisperer, which could be saved by ABC as well.

Charlie Sheen, meanwhile, has successfully concluded a contract renegotiation that will see him return to CBS' Two and a Half Men for two additional seasons. "To put a fitting end on the two and one-half months of whirlwind speculation, I'm looking forward to returning to my CBS home on Monday nights," said Sheen via a statement released by his publicist. "I want to thank (CBS Corp. president and CEO) Les Moonves for his support."

Over at the CW, the netlet announced that the axe had fallen on Melrose Place, finally ending months of certainty that the DOA series would be cancelled. However, the CW team did opt to renew on-the-bubble series Life Unexpected and One Tree Hill.

The netlet is expected to pickup two new dramas for next season: espionage actioner Nikita from Warner Bros. Television and college drama Hellcats, from CBS Television Studios and WBTV.

CBS will announce its fall schedule tomorrow, with the CW wrapping up upfronts week on Thursday.

The Flaming Nose TV Blog said…
Let's hope that somebody does pick up "The New Adventures of Old Christine" -- this is a terrific old-style comedy with much solid physical comedy and a terrific cast. We hate to see a talented comedienne like Julia Louis-Dreyfus lose her showcase. She and Tina Fey are the funniest women on television.

cory said…
I hope that ABC will pick up both Old Christine and Ghost Whisperer. And I hope GW gets a fall slot and not a half season.
5/18/2010

steve paris said…
A reprieve for Rules of Engagement?

Why can't this show get any love? The most recent ratings show it doing better than HIMYM and I believe it outperforms that show regularly, despite getting no promotion.
5/19/2010