Dancing with the Upfronts: NBC Cuddles Up to Perfect Couples, FOX In Bed with Will Arnett for Running Wilde 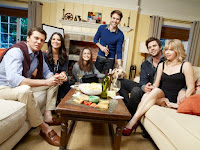 As the march to the next week's upfronts continues, two more projects have gotten the greenlight to series this afternoon.

NBC has officially announced that it has given a series order to comedy Perfect Couples, marking the sixth series pickup so far as the Universal Media Studios-produced comedy joins the previously announced Chase, Undercovers, The Event, Love Bites, and Outsourced.

“Jon and Scott are hugely talented writer-producers and they’ve really delivered with Perfect Couples,” said President, Primetime Entertainment, NBC and Universal Media Studios, in a statement. “The comedy includes a cast of three distinctive couples who share the same issues and will draw viewers in with their relatable stories.”

Here's how NBC describes the series: "Perfect Couples depicts the misadventures of three engaging couples as they struggle to find out what makes the ideal relationship -- and how to maintain it through humorous trial-and-error. The series explores their heroic journey in search of the perfect relationship without destroying each other in the process."

Meanwhile, FOX announced that it had ordered Mitch Hurwitz, Will Arnett, and Jim Valelly's single-camera comedy Running Wilde (formerly known as Wilde Kingdom) has been given a greenlight.

Project, from Lionsgate Television, stars Arnett, Keri Russell, Joe Nunez, Jayne Houdyshell, and Stefania Owen, revolves around a arrogant oil company scion who is madly in love with a socially conscious woman (Russell) from his past. (There's a whole lot more involving an indigenous tribe, a pony, and a terrifying nanny/security expert but I'll leave that on the QT.)

djmorris said…
So happy that "Running Wilde" is a go! I can't wait to see Will Arnett and Keri Russell together!
5/13/2010