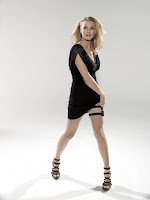 NBC today officially announced that it had renewed action-comedy Chuck for a fourth season of thirteen episodes, landing it a spot on the 2010-11 schedule at the Peacock.

"Chuck has proven its enduring appeal and we love the new creative direction that Josh and Chris have taken the show," said Angela Bromstad, President, Primetime Entertainment, NBC and Universal Media Studios, in a statement.

While news of the renewal leaked out yesterday (and was itself confirmed earlier today by co-creator Josh Schwartz via Twitter), NBC today officially gave words of the Season Four renewal of Chuck in a press release that also touted the series order of several projects including Outlaws (formerly known as Garza), Harry's Law (formerly known as Kindreds), superhero drama The Cape, and comedy Friends with Benefits.

While the news of Chuck's renewal is cause for celebration, there is a bit of news that may put a damper on the joyous occasion: Televisionary has learned exclusively that executive producer Ali Adler will not be returning to Chuck for a fourth season.

According to a source close to the situation, Adler has accepted a position on ABC's new superhero family drama No Ordinary Family, from executive producers Greg Berlanti and Jon Harmon Feldman and ABC Studios. Series, which stars Michael Chiklis, Julie Benz, and Tate Donovan, revolves around a family who gains superpowers when their plane crashes in the Amazon rainforest. Adler is said to have signed on to No Ordinary Family earlier this month, prior to NBC's decision on Chuck's fate.

When reached via email, Adler had no comment on the rumor.

Adler will be much missed: not only had she been responsible for writing some of the Warner Bros. Television-produced series' most beloved episodes but, thanks to her generosity and passion for the series, remained one of its truest champions and advocates.

UPDATE: Adler has now confirmed her departure from Chuck via Twitter, where she wrote, "Decision 2 leave chuck family for NoOrdinaryFamily was a tuff 1. Love @joshschwartz76 + evry1 I worked w & all amzg fans. Long live Chuck!"

Unknown said…
I saw the tweet from @nbcchuck earlier today. Good news, indeed! Too bad it's only 13 eps, but I have hopes they'll extend that later (as they did for S3).

ChuckNut said…
indeed, it's a bittersweet day in the chuckverse. nevertheless, i wish ali all the best and thank her for her many great contributions to the show and its fandom. jeffster bows its head to you, ali. now we can only pray that the rest of the writing team can somehow fill the void she leaves behind...
5/14/2010

Chris L said…
So Chuck is coming back, eh? Hmm. I would just like to take a moment to say...

cory said…
I started watching Chuck back when it premiered. I was a fan but I had such a huge list of shows I was watching I ended up only keeping up with as few as possible, especially shows that were on the bubble anyway. I've decided to go back and start rewatching from the first episode and just doing mini-marathons until I'm caught up.

The only thing that confuses me is this 13-episode thing. Chuck has proven itself to have a steady fanbase, I think it deserves to get a 22-24 episode season. As promising as their new shows may be, none sound as though they will be the type of show to get an active, very vocal fanbase.

As for No Ordinary Family, I'll be checking it out regardless. I tend to prefer shows that are either sci-fi or fantasy or shows that are just different from the more generic "types". I don't like Chiklis much as an actor, so I'm hoping I'll like the writing and the rest of the cast.
5/15/2010