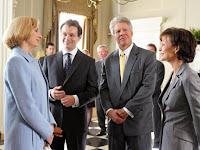 Over at The Daily Beast, I talk to Michael Sheen, Dennis Quaid, Hope Davis, Helen McCrory, and Richard Loncraine about HBO's upcoming biopic, The Special Relationship, which airs Saturday evening on the pay cabler.

You can read my article, entitled, "Bill & Hillary & Tony & Cherie," which features the cast and crew of the telepic--the third offering in Peter Morgan's so-called Blair Trilogy (after The Deal and The Queen)--talking about Clinton and Blair's legacy, the bedroom confession between Bill and Hillary, and the nature of political friendships.

The Special Relationship airs Saturday at 9 pm ET/PT on HBO.

Erin Bell said…
Excellent piece. Loved "The Queen" and "The Deal" and am really looking forward to this!
5/28/2010