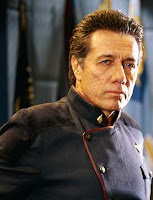 The Chicago Tribune's Maureen Ryan is reporting that Syfy is developing an online prequel to Battlestar Galactica entitled Blood & Chrome, which would focus on the life of William Adama during the first Cylon War and will be written by Caprica's Michael Taylor. Project, which would consist of nine to ten episodes of roughly ten minutes each, would focus "about a young man's initiation into war: both the realities of war as fought by soldiers on the ground (and in Battlestars and Vipers), and the somewhat less real version portrayed in the media," according to Taylor. Interestingly, should the online series be a hit, it could serve as the basis for a backdoor pilot or a full-blown series set during the first Cylon War. And, given the fact that it's running online, don't look for any content restrictions. "We're not going to be shying away from R-rated blood and guts and sex," Taylor told Ryan. "Because this is initially meant to air online, we pretty much have no restrictions in that department." [Editor: Ryan also has details from Comic-Con's Caprica panel there as well.] (Chicago Tribune's The Watcher)

In a stunning move, ABC Entertainment Group President Steve McPherson yesterday resigned from his position, just days before the network's session at the Television Critics Association's Summer Press Tour. He had more than a year left on his contract, which was set to expire in September 2011. "I want to thank the wonderful team of individuals who have worked with me throughout my time here and wish them nothing but the best," said McPherson in an official statement that was released to the press. Deadline's Nellie Andreeva is reporting that ABC has confirmed that Paul Lee, who previously orchestrated huge gains for BBC America and ABC Family, will be moving into McPherson's office and will take over the leadership role at the network, which slipped into third place this year. As for McPherson's next move? "I'll be announcing my future plans shortly which will include a new entrepreneurial venture in the spirits business. While I will continue with my ongoing wine business, I'll also reveal plans for my involvement in a new media company." (Deadline, Variety)

Looks like the show will go on, after all. NBC Primetime Entertainment President Angela Bromstad has said that Steve Carell will be leaving NBC's The Office when his contract expires next year but that the comedy will continue on without him... and will remain in its Thursday night at 9 pm timeslot. "We've been lucky to have had him as long as we've had. These things happen when you have such a major movie star in a show," said Bromstad. "Not to diminish the departure of Steve, because that will impact the show, but we have tremendous faith in the writers and actors to keep it alive." [Editor: my own feelings about what NBC should do have already been discussed in this feature over at The Daily Beast.] (Variety)

Entertainment Weekly's Michael Ausiello is reporting that Billy Baldwin (Dirty Sexy Money) is close to a deal to appear in multiple episodes of NBC's Parenthood this fall, where he will play a new love interest for Lauren Graham's Sarah, one who just happens to be the boss to Peter Krause's Adam. (Entertainment Weekly's Ausiello Files)

E! Online's Drusilla Moorhouse has a great recap for Comic-Con's Sons of Anarchy panel over the weekend and creator Kurt Sutter's plans for the third season, which will include a clash with the IRA in Ireland. "Our pursuit of Abel really breaks open the world," said star Charlie Hunnam. "John Teller had a lot to do with Ireland and the origin of gun running and the Sons of Anarchy. So, it's through us going to Ireland, inevitably, we learn a little bit more." (E! Online's Watch with Kristin)

Deadline's Nellie Andreeva is reporting that Anson Mount (Conviction) and Dominique McElligott (The Guard) will star in AMC period drama pilot Hell on Wheels opposite Common. Mount will play Cullen, described as "a former slave owner and a Confederate soldier determined to avenge the rape/murder of his beloved wife by tracking and killing the Union soldiers who killed her" who ends up working on the Transcontinental Railroad. McElligott will play Lily Bell, described as "an intelligent woman taking care of her ill husband who is part of the team of surveyors mapping the railroad's course." (Deadline)

The Hollywood Reporter has an interview with Community creator/executive producer Dan Harmon in which he admits that is "terrified and humbled" that his NBC comedy will compete with CBS' The Big Bang Theory this fall. "I hope I don't get destroyed," Harmon told Hollywood Reporter. "I think there's room for both. I think we're like little containers of peas in that frozen dinner, but we're not quite the Salisbury steak." (Hollywood Reporter)

Robert and Michelle King, the creators of CBS' The Good Wife, have signed a two-year overall deal with CBS Television Studios, which will cover their services as showrunners on the CBS drama, returning for its second season this fall, as well as a development component. (Variety)

TVGuide.com's Denise Martin is reporting that Noah Munck has been promoted to series regular on Nickelodeon's iCarly. (TVGuide.com)

CBS' legal drama The Defenders is hopping across the pond, following a deal between the UK's FX and CBS Studios International. (Variety)

Harrison said…
I want to be excited about a BSG prequel (even an online one) but Caprica has been such a disappointment that I'm not going to get my hopes up.
7/28/2010