Study in Bronze: An Advance Review of Season Two of Syfy's Warehouse 13 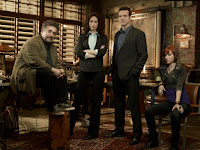 Syfy has had a lot of success of late with quirky, humorous dramedies where the science fiction often takes a backseat to the trappings of traditional drama. Think of them more as extraordinary dramas than say, purely speculative fiction.

This is particularly true with Syfy's original series Eureka and Warehouse 13, both of which return to the schedule this week with new seasons. In their own ways, both series have served to push the network further into the mainstream, fusing together the supernatural/speculative elements of the genre with mass appeal to create a new sub-genre that's heavy on the humor and light, well, in general.

While Eureka focuses on a town of super-scientists hidden in the Pacific Northwest, Warehouse 13 using somewhat similar trappings: a tiny town in the middle of nowhere hides a massive government-sponsored secret. In this case, that secret is the Warehouse itself, a depository of arcane and mysterious artifacts, each with their own abilities. It's up to the agents to safeguard these secrets, investigate mysterious phenomena, and file away any artifacts they acquire in the field.

It's the latter series that returns tonight with a new season that finds deliciously mismatched Warehouse 13 agents Myka Bering (Joanne Kelly) and Pete Lattimer (Eddie McClintock) attempting to grapple with assaults from numerous directions, while their shifty supervisor Artie (Saul Rubinek) attempts to track down the missing Claudia (Allison Scagliotti) after the events of last season's finale.

To say more than that would be give away quite a few plot points from the second season opener, "Time Will Tell," a fun installment that gives the series a global feel as Myka and Pete head to London and Artie trails Claudia to Switzerland. The chaos created by the nefarious MacPherson (Roger Rees) spills out of control here as his master plan is revealed.

Just what that is you'll have to wait to find out, but I will say that it's one hell of a bizarro mindtrip that involves a classic sci-fi author, bronze, and a potential new adversary for the gang at Warehouse 13, one that I hope sticks around all season long to make things very difficult for Myka and Eddie.

The second episode will be one that will have sci-fi fans buzzing about for some time to come, particularly as it features guest stars Jewel Staite and Sean Maher, who previously starred together in Joss Whedon's woefully short-lived Firefly. Here, the duo is involved in a series of inexplicable occurrences, one that seems to involve a vigilante battling criminals in a town beset by crime. But superheroes only exist in comic books, right? Hmmm...

Both episodes point towards why Warehouse 13 has won over viewers. It's got a slick combination of humor, heart, and frothy action that never veers too close to the darkness and keeps things humming along with a nice pace. During the hottest season of the year, that might just be the perfect television complement to a day beside the pool: it's familiar, cool, and--so long as you don't go looking for the deep end--there's no danger of drowning.

KriZia said…
Jace - thank you for reviewing this show. I'm head-over-heels in love with it! Can't wait to see tonight's episode and get back to you. Keep reviewing cool shows. Until SDCC, my friend :) -k
7/06/2010

joy said…
I gotta say, W13 lost me about 3/4s of the way into the season, but I was brainwashed during the whole MerlinS2 marathon with all the cute W13 promos. I rewatched the last 3 W13s, and am back on board. Who says ad repetition doesn't work?
7/06/2010

Amanda from Georgia said…
Warehouse 13 also has a bit of "learning is cool" tossed in the mix too. The nerd in me enjoys the shout-outs to historical events.

KriZia said…
Jace - thank you for reviewing shows that I absolutely LOVE! This show has the best balance of drama, humor, wit and sci-fi all wrapped into one gigantic ball steered by Eddie, Joanne and Saul. Can't wait for tonight's premiere! Until SDCC, my friend :) -k
7/06/2010