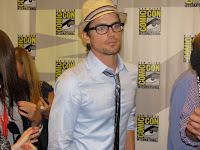 Missed yesterday's panel at San Diego Comic-Con for USA's stylish and slick caper drama White Collar? No worries as we've got you covered.

Televisionary special correspondent Lissette Lira was on hand for yesterday's panel and offered up the following highlights from the much anticipated White Collar event.

Among the tibits, there are some seriously random insights into the workings of the White Collar cast and crew:


Random, no? Televisionary BFF Lissette Lira also managed to shoot some video of the White Collar panel, which can be found below.