Once for Luck: An Advance Review of Season Four of Syfy's Eureka and New Series Haven

Tonight, Syfy launches two series, one returning favorite and a new offering, both of which are set in small towns that conceal the truth about their nature.

Syfy itself has had more success with its light procedurals such as Eureka and Warehouse 13 (which itself returned to the lineup earlier this week) than with the sort of doom-and-gloom of fellow original series Caprica, but that doesn't mean that the network should slide permanently over to to the sunny side of the genre. (After all, there does need to be not only a balance between light and darkness in terms of tone but also a sense that there's a variety of programming on offer at the cable network.)

However, summer might just be the perfect place for such sci-fi jocularity and off all of Syfy's series, the one that best achieves the blend of humor and action (along with a real sense of speculative fiction) is Eureka, created by Andrew Cosby and Jamie Paglia.

Eureka returns tonight with its fourth season premiere ("Founder's Day"), which is hands down the very best installment of the sci-fi series to date, offering a tale of time travel, doomed romance, potential hope, and the sort of scientific appetite that, well, founded Eureka in the first place.

It's an episode that plays around with its soapy elements (marriage proposals, breakups, and romantic entanglements of all kind) as well as the space-time continuum, and features a look at the Eureka that was, gloriously recreating the 1940s military base camp atmosphere as the modern-day residents celebrate Founder's Day... and some of them get a first-hand look at what really went down in the past.

Without giving too much away, I will say that that the episode shakes things up considerably for the characters, most especially for Sheriff Jack Carter (Colin Ferguson), Allison Blake (Salli Richardson-Whifield), Henry Deacon (Joe Morton), Jo Lupo (Erica Cerra), and Fargo (Neil Grayston), resulting in a series of events that, well, that would be giving things away.

At the center of this mystery and its dramatic consequences is a new face to Eureka: Dr. Grant, played with superb wit and charisma by former Battlestar Galactica co-star James Callis. While he played BSG's Baltar with a combination of narcissism and self-loathing, here Callis imbues Grant with a certain rougish je ne sais quoi while making the brilliant theoretical physicist utterly appealing at the same time. Suffice it to say that the town of Eureka may never be the same after Grant crosses paths with Carter and Allison. Hmmm...

All in all, "Founder's Day" (and the following installment, which picks up the action scant seconds after the end of "Founder's Day") is a superb start to a season that promises to be Eureka's finest and a fantastic jumping-on point for viewers new to the series. It's an episode that's packed with pathos and humor and an unpredictable nature that points towards anything being possible in Eureka... and indeed probable. 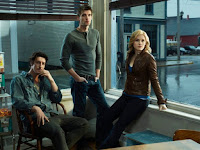 Syfy's newest series, Haven, lacks the charm and poise of Eureka. The pilot episode, which airs tonight after Eureka starts off on a strong note as FBI Agent Audrey Parker (Emily Rose) finds herself shuttling towards a small Maine fishing town in pursuit of a suspect... and manages to uncover both a decades-old secret about the town of Haven and a startling connection to her own mystery-shrouded past.

Written by Sam Ernst and Jim Dunn, Haven has some promise but the second half of the pilot episode seems to squander it. Rather than embed some real grit and eeriness into the drama, it descends into somewhat stereotypical sci-fi trappings about supernatural abilities, mysterious storms, and easily solved crimes of the week, whereas they should be making Haven into a depository for our dreams (and nightmares) about small coastal towns, where the quirkiness (or even oddness) of the inhabitants is at odds with the idyllic nature of the place itself.

It's hard not to compare it to David Lynch and Mark Frost's seminal small town drama Twin Peaks, albeit without the terror lurking behind every patterned sofa. But while Haven needn't be as bleak or terrifying as Twin Peaks, it needs to become a little less soft and a little more threatening at times, as though the morning mist and dead of night are themselves potentially ominous symbols of coastal life for an outsider like Audrey.

A love triangle that's quickly set up between Audrey and two very unlikely suitors--local cop Nathan (Lucas Bryant) and bad boy Duke Crocker (Eric Balfour)--is an interesting angle, particularly as the romance doesn't completely intrude on the action, nor does it make Rose's Audrey Parker any less steely or inquisitive.

There's potential to be had in Haven, if the writers can find the right tone and the right balance of serialized and procedural elements. In the meantime, however, Haven might be one town you want to check out of early.


Season Four of Eureka begins tonight at 9 pm ET/PT on Syfy, immediately followed by the series premiere of Haven at 10 pm ET/PT.

Greer said…
Eureka and Warehouse 13 are just too bland for my taste. I'd love to see some edgier projects on Syfy. Sadly, it looks like Haven won't fit the bill.
7/09/2010

Harley said…
That Eureka episode is one of the smartest reboots I've seen. Can't wait to see where they take it.
7/10/2010

cory said…
I personally loved Haven. It appealed to me more than Eureka ever has, in fact it holds more appeal to me than any other SyFy original show I can think of. *shrug*
7/12/2010