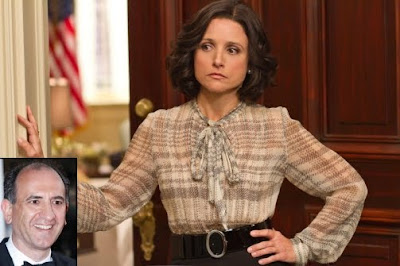 At The Daily Beast, you can read my latest feature, "HBO's Superb New Veep," in which I speak to creator Armando Iannucci about the vice presidency’s comic potential, U.S.-U.K. relations, why he didn't enter the civil service, and how Veep compares to The West Wing.

With HBO’s acerbic and dazzling political comedy Veep—which depicts a power-hungry if buffoonish female U.S. vice president and her staffers—Scottish-born creator Armando Iannucci turns his attention to American politics, bringing his deadpan wit, rapid-fire dialogue, and comedy of the uncomfortable to the corridors of power in Washington.

Veep, which premieres Sunday evening, stars Julia Louis-Dreyfus (Seinfeld) as Vice President Selina Meyer, a politician who, although a heartbeat away from becoming the POTUS, spends her days scheming about biodegradable utensils, filibuster reform, and getting the name of a potential future hurricane—Hurricane Selina, naturally—changed so as not to reflect poorly on her.

It’s not the first time Iannucci, 48, has tackled the follies and failures of petty bureaucrats. He was nominated for an Academy Award for Best Original Screenplay for his 2009 political feature film, In the Loop, which explored the so-called special relationship between the United States and United Kingdom.

“I always feel that Brits do themselves down when they come to America,” said Iannucci, speaking to The Daily Beast in January. “They always feel that because they’re in America they must just agree to whatever happens to them there, and then they go home feeling a little bit as if they’d done the wrong thing.”

“That’s what was going on in the Blair administration,” he continued. “They were just so star-struck being in the Oval Office that they didn’t quite keep a focus on what they were doing…We’re slightly on more equal terms now because of the economy; no one now is the supreme controller of events.”

In the Loop depicted the breakdown of that relationship, the dirty dealings of both parties, and of the need to save face and retain control of public perception, even in the midst of monumental information failures. Before that came Iannucci’s breakthrough BBC comedy The Thick of It, which spawned three additional seasons and two specials, as well as a failed ABC adaptation in 2007, and introduced the world to the sadistic and rabid communications director Malcolm Tucker (Peter Capaldi).

With Veep, Iannucci leaves behind the dreary, utilitarian offices of the Department of Social Affairs and Citizenship of The Thick of It for the pomp of Washington, D.C., and takes a far deeper look into the American political system than he’s attempted before, building on the success of In the Loop. That film displayed the vast differences between the political systems of the U.S. and the U.K., something that’s keenly felt in Veep if you’ve even a cursory knowledge of British politics.