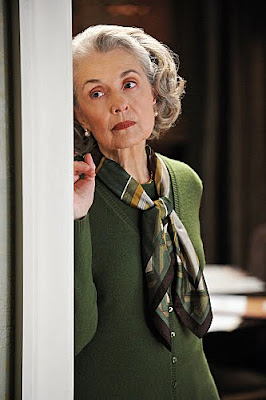 71-year-old Mary Beth Peil is stealing scenes for her work on CBS’ The Good Wife.

Over at The Daily Beast, you can read my latest feature, "The Good Wife's Bad Mother," in which I talk to the former opera singer and Dawson’s Creek star about playing Jackie Florrick.

While The Good Wife’s title refers, rather cheekily, to Julianna Margulies’ Alicia Florrick—who found herself embroiled in a political and sexual scandal at the start of the series’ run—the show explores both individuals’ and society’s definitions and expectations of wives, mothers, and career women.

Margulies’ Alicia juggles work, children, and romance, often without much regard for her own well being, perhaps outside of a solitary glass of red wine at the end of a day in court. Yet Alicia’s outlook, behavior, and mores are constantly commented on or outwardly attacked by her mother-in-law Jackie Florrick, played by 71-year-old Mary Beth Peil, who began the series as a babysitter for Alicia’s teenage children but who has recently emerged as the show’s de facto villain.

Peil is perhaps best known for her role as religious-minded Evelyn “Grams” Ryan on six seasons of teen-centric soap Dawson’s Creek, but the Tony Award-nominated actress began her career as a soprano, performing with the Metropolitan Opera, the New York City Opera, and Boris Goldovsky’s company. Peil will once again display her singing skills as Solange LaFitte in a limited five-week revival of Stephen Sondheim’s Follies in Los Angeles beginning next month, and she is currently starring Off-Broadway as real-life virtuoso violinist Erika Morini in The Morini Strad.

In Sunday’s episode of The Good Wife (“Pants on Fire”), Peil’s Jackie found herself confronted by both her son Peter (Chris Noth) and Alicia over her plans to purchase the separated couple’s old home, suffered a stroke, was revealed to have stolen from her grandchildren’s trust fund, and emerged as the heir apparent to Livia Soprano’s mantle of manipulative and controlling motherhood. The Daily Beast spoke with Peil about playing Jackie Florrick, her relationship with Alicia, Dawson’s Creek, what lies ahead, and more.