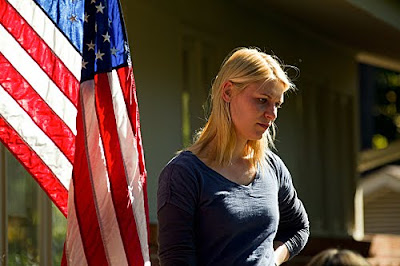 With Showtime’s recent dramas Homeland and Shameless, characters with bipolar disorder on television are no longer on the fringes.

Over at The Daily Beast, you can read my latest feature, "TV Tackles Bipolar Disorder," in which I explore the portrayals of Carrie Mathison and Monica Gallagher, played by Claire Danes and Chloe Webb, as individuals with bipolar disorder and how those realistic and nuanced portrayals both shape their respective series but also help to remove the stigma associated with mental illness. I talk to Homeland co-creator Alex Gansa about Carrie's illness and how her decision to turn to ECT will affect Season Two (beginning in September) and with Shameless writer/producer Etan Frankel about the handling of Monica and how her condition has molded the Gallagher family.

On Homeland, Claire Danes’ Carrie Mathison is a brilliant and ambitious CIA analyst, gifted with a beautiful mind that sees connections and hidden patterns that others around her can’t. She’s driven to an obsessive fixation on Nicholas Brody (Damian Lewis), a recently returned POW whom she believes to be a terrorist sleeper agent. Carrie, to her horror and ours, is right.

However, Carrie suffers from bipolar disorder, a crippling psychological condition that is sometimes known as manic-depression, which affects roughly 5.7 million Americans, or 2.6 percent of the U.S. adult population, according to data from the National Institute of Mental Health. The illness includes “dramatic shifts in mood, energy, and activity levels that affect a person’s ability to carry out day-to-day tasks” that “are more severe than the normal ups and downs that are experienced by everyone.” (Other symptoms can include but are not limited to erratic behavior, hypersexuality, rapid cycling between mood states, and even delusions and hallucinations.)

What makes Carrie such a superb intelligence agent is also her Achilles’ heel, and her journey over the course of the first season of Homeland was one of frustration, error, and ultimately being right. Her words go unheeded when her condition is discovered by her employers, making her a modern-day Cassandra, a woman too smart for the room, too close to the truth, whose viewpoint is discarded by men who believe they know better. Danes’s stunning performance is one of several new groundbreakingly realistic depictions of mental illness, particularly bipolar disorder, on television.

“A lot of women in particular have responded to this idea that Carrie was right and that nobody knows she was right,” Homeland’s cocreator/executive producer Alex Gansa told The Daily Beast. “There’s a real sense of tragedy in that.”