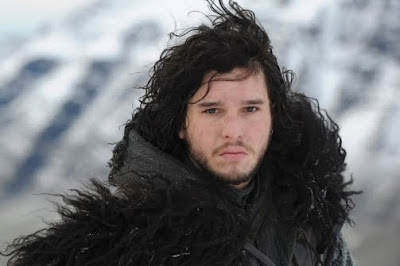 Over at The Daily Beast, you can read my latest feature, entitled "Game of Thrones' Emo Hero," in which I sit down with Kit Harington and talk about playing Jon Snow, fame, what’s to come in Season Two, Ygritte, Samwell, and why he refuses to wear a wig.

Within the harsh world of HBO’s fantasy series Game of Thrones, based on George R.R. Martin’s A Song of Ice and Fire novels, you either live by the sword or you die by it. In the Seven Kingdoms of Westeros, court is a deadly pit of vipers, with each of the titular game’s players scheming and manipulating their way to higher realms of power and influence.

Not everyone is engaged in these sordid power plays. Bastard-born Jon Snow is a child of the North, raised in the ice and cold of Winterfell before being packed off to the Night’s Watch, a brotherhood of men sworn to protect the 700-foot ancient Wall and the realm from the threats that lay beyond it.

One of the show’s most pivotal characters, Jon Snow is played with emotional grit and a keening angst by 25-year-old actor Christopher “Kit” Harington. Prior to Game of Thrones, Harington starred in the original West End production of War Horse; he’ll next be seen opposite Ben Barnes, Jeff Bridges (“This is The Dude from The Big Lebowski,” said Harington, excitedly), and Julianne Moore in The Seventh Son, an adaptation of Joseph Delaney’s novel The Spook’s Apprentice. (Harington was recently forced to drop out of David Dobkin’s $120 million-plus Arthur & Lancelot, in which he would have costarred as Arthur, due to scheduling issues.)

The self-described “private person” is about to become an even bigger star with his arc in Season 2 of the HBO drama, and with that comes a sharp spotlight on his time off-screen. “I’ve got an idea of my personal life,” said Harington. “I have a wild streak, but I like to keep that very much for my friends. I love going out. I love partying. Last night, I was in a club, and it being on the Web the next day is suddenly something I’m aware of. I can’t be the Kit in public that I might have been once.”

In the second season of Game of Thrones, Jon Snow makes a monumental leap from boyhood to adulthood, encountering the mysteries of the world at large and of his own heart. While Harington was coy about whether there is romance in the cards for Jon, he did acknowledge that watching the show with his parents makes for an interesting experience. “I can’t watch this with my mum,” he said. “My granny watches it. She loves it. She’s a saucy old minx, my grandma. She’s less prudish about it than anyone, really.”

Continue reading at The Daily Beast....