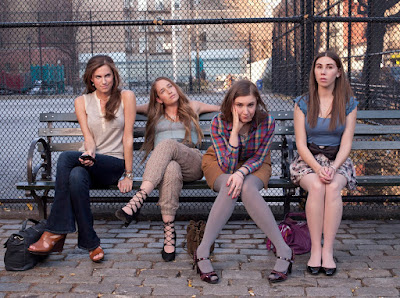 HBO’s Girls, which launches Sunday, is provocative, original, and addictive.

Over at The Daily Beast, you can read my latest feature, "HBO's Girls is the Best New Show of 2012," in which I (not surprisingly, given the headline), review HBO's Girls, from creator/writer/director/star/executive producer Lena Dunham (Tiny Furniture).

With her 2010 Sundance-darling film Tiny Furniture, Lena Dunham captured the malaise and uncertainty of a generation of postcollege 20-somethings with grit, humor, and painful realism, transforming Manhattan into a depressing playground for overeducated, underqualified youths in an economy that had seemingly forgotten about their existence.

Many of the same themes—and several of the same actors—are transported from Dunham’s accomplished indie film to HBO’s infectious and addictive Girls, the winking black comedy which begins Sunday evening, and which counts Dunham as creator, writer, director, and star (and one of the executive producers, along with Judd Apatow and Jenni Konner.) The show represents a major accomplishment for the woman at its helm, and, in the three episodes provided to press, the voice that Dunham shared in Tiny Furniture has been honed to perfection here, sharp and incisive, witty and brutal.

Dunham stars as Hannah Horvath, a would-be novelist and intern who is supported by her professor parents. She lives in a shabby walk-up with her best friend Marnie (Allison Williams, daughter of news anchor Brian), who works in an art gallery, has terrible sex with her lothario partner Adam (Adam Driver), and is more or less adrift. Hannah is not so much navel gazing, as navel obsessing, whether it is about being the “voice of [her] generation” (or “a voice of a generation”), the “stuff that gets up around the sides of condoms,” whether she has AIDS, or what she will do with her life.

She is, in other words, the archetypical 20-something existing in the increasingly deep chasm between adolescence and adulthood, and Dunham makes Hannah instantly charismatic and hilarious, willing to bare her body and her soul with the same ease.

Girls is, in many ways, the antithesis to HBO’s own ladies-in-Manhattan fantasy, Sex and the City, offering a far more realistic portrayal of sisterhood than that of Carrie Bradshaw and Co., though virginal student Shoshanna (Mad Men’s Zosia Mamet, daughter of playwright David) does have a SATC poster prominently displayed in her “bachelorette pad,” and she categorizes herself and other women by Sex and the City character types. But while Carrie and her kin moved effortlessly through high fashion and fabulous sex, Hannah and her friends live a decidedly less exuberant lifestyle.