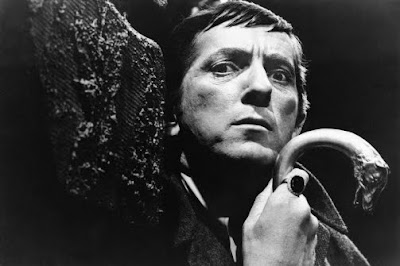 Jonathan Frid, who played the bloodsucker Barnabas Collins on the 1966-1971 cult soap Dark Shadows, has died at 87.

Over at The Daily Beast, I remember how the actor propelled a struggling soap into a cultural phenomenon, as I offer an obituary for the Dark Shadows star who introduced us to Barnabas Collins.

Jonathan Frid, the Canadian actor who first portrayed the remorseful vampire Barnabas Collins in the 1960s and 1970s in the cult classic soap opera Dark Shadows died earlier this week at the age of 87. Johnny Depp is set to step into the period shoes of the bloodsucker in Tim Burton's feature film version of the show, opening May 11.

A publicist working with Frid to promote the release of Dark Shadows: The Complete Series on DVD confirmed his death.

Born in Ontario, Canada in 1924, Frid served in the Royal Canadian Navy during World War II before studying at the Royal Academy of Dramatic Arts in London and then emigrating to the United States, where he obtained a Master of Fine Arts degree in directing from the Yale School of Drama in 1957. Originally intended to appear in a short story arc on Dark Shadows for just three or four weeks, Frid's Barnabas ended up reinvigorating the struggling soap and propelled it into a cultural phenomenon, while the character of Barnabas Collins became so popular that Frid remained entrenched on the show until its cancelation in 1971.

Frid, who would go on to perform in countless one-man shows of his own creation—such as Jonathan Frid's Fridiculousness and Jonathan Frid's Fools and Fiends—and numerous Shakespearean plays, brought a tenderness and deeply conflicted nature to the role of vampire Barnabas Collins, which became a mainstay on the ABC soap which ran between 1966 and 1971. An unconventional romantic lead, Frid's depiction of Barnabas Collins as both a man out of time and in the throes of an existential crisis due to the nature of his affliction would become influential on popular culture, transforming vampires from thoughtless creatures into tragic entities constantly at war with their own humanity. Barnabas's storylines often involved his quest to reclaim his lost love, Josette, whom he believed to have been reincarnated into the present day, after he is released from his centuries-long slumber in the family crypt.