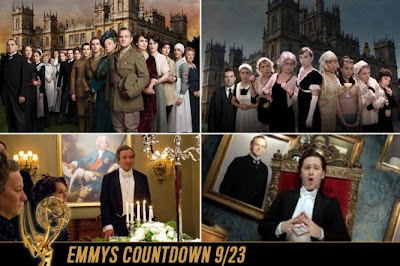 PBS’s white-hot British import Downton Abbey, nominated this year for 16 Emmy Awards, is now a bona-fide cultural phenomenon—with its own spoofs. From Jimmy Fallon’s "Downton Sixbey" to the Mean Girls-Downton mash-up, I take on the six best.

Over at The Daily Beast, you can read my latest feature "6 Best Spoof Videos of the Emmy Nominated Period Drama Downton Abbey," in which I take a look at the six best Downton Abbey video spoofs and discuss the swirling pop culture influence of the period drama.

While devotees of costume dramas instantly fell under the spell of Downton Abbey when it first premiered in the U.S. in January 2011 on PBS’s Masterpiece Classic, it took a second season for it to truly permeate popular culture.

Fans, meanwhile, have taken to performing their own takes on Downton, spoofing the show with paper dolls, zombies, dogs, and stuffed animals. There’s even a “boyfriend’s guide” to the period drama that educates reluctant viewers about the difference between a “batman” and the Batman. PBS’s Sesame Street, meanwhile, plans to follow up its True Blood and Mad Men spoofs this fall with “Upside Downton Abbey,” described as “a chaotic manor house where gravity is inverted with Big Bird and Cookie Monster trying to maintain order.”

On Twitter, there are accounts dedicated to Lady Mary’s Eyebrows and to lady’s maid Miss O’Brien’s Bangs (@OBriensBangs), which seem to have a life of their own. The latter was created by comedian and actress Kate Hess, who also wrote and stars in her own Downton-themed one-woman show at the Upright Citizens Brigade.

“I had no idea that O’Brien’s Bangs would touch such a nerve!” said Hess in an email. “It made me laugh to think of her bangs having the twitter bio of ‘B. 1913 to a dustmop and a barrister’s wig.’ As an actress, tweeting as O’Brien’s Bangs allows me to explore a character, but I don’t actually have to learn any lines or get out of my pajamas. Also, O’Brien’s Bangs are more omniscient than even O’Brien herself—the bangs see past and future and even have their own tiny Ouija board.”

The producers of Downton Abbey, meanwhile, are only too pleased to see the show get skewered.

“I love them,” Masterpiece executive producer Rebecca Eaton told The Daily Beast. “Imitation is the sincerest form of television, Fred Allen [said]. There have been Masterpiece spoofs over our 40 years: Alistair Cookie, Monsterpiece Theatre. It’s an intersection of wit and humor, and it shows that you’re in the water. I don’t think anybody connected to the production in any respect does not like them.”

Downton Abbey creator Julian Fellowes, meanwhile, was thoroughly charmed by last year’s BBC Red Nose Day two-part spoof of the show, the first part of which can be seen below.