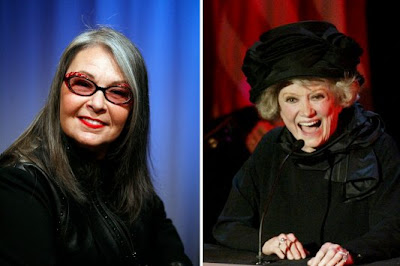 Phyllis Diller, who died Monday at 95, paved the way for generations of female comedians. Roseanne Barr on the legendary and ‘paradoxically regal’ comedian, her enduring legacy, and what the gin-drinking Diller thought about the afterlife.

Over at The Daily Beast, you can read a feature that I had a hand in making happen: "Roseanne Barr Hails the Comedic Genius of Phyllis Diller," in which Barr reflects on the death of her friend, gin-drinking comedy legend Phyllis Diller.

All hail and observe a moment of silence—a genius has vacated this space and left us here to remember her life and her work. I remember hearing her records as a child. My dad collected comedy records, and what I loved the most about her was her laugh. She was the only comic I saw who laughed at her own jokes, and I found that funnier than hell. I stole that from her, but she viewed it as more a tribute than a lift. The last several years I called my ex-husbands “Fang” on stage, too.

It was timeless, that wacky, tacky character she created; the cigarette holder was genius, paradoxically regal. She was a victorious loser hero, the female iteration of Chaplin’s Little Tramp, replete with costume jewelry that would embarrass Rick Ross.

You could tell the character had a messy house, and she couldn't care less because she also had a dreadful husband and a world of shit. So? Hey, must be time for a gin martini and some laughs!

It wasn’t until you saw her paintings or heard her play a concerto on the piano that you understood that this woman lived her life as a true artist and a revolutionary. She knew a woman’s place was not in the home, at a time when everyone on earth regurgitated that canard every minute of every day.